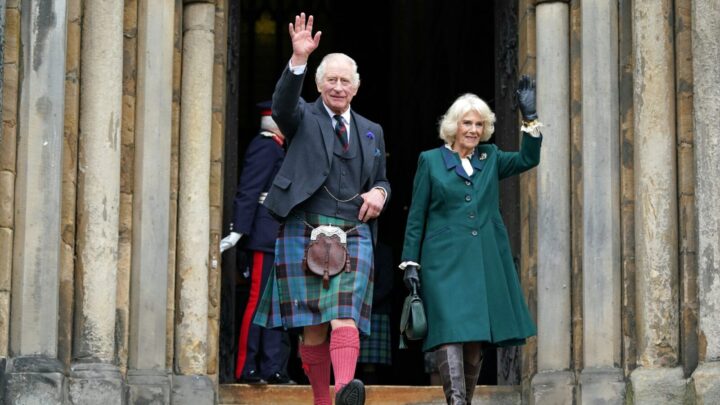 Large crowds have gathered on the streets of Scotland once again as King Charles III and Queen Consort Camilla paid a visit to Edinburgh in their first engagement since the Royal Family’s mourning period ended.

Massive crowds packed the streets of Dunfermline in Fife, north of Edinburgh, on Monday, October 3, as the couple made their way to the City’s Chambers to celebrate Dunfermline after its status from town to city had been changed during the late Queen Elizabeth II Platinum Jubilee earlier this year.

As King Charles III formally granted city status to the former Scottish town, His Majesty also paid a touching tribute to his mother, the Queen.

“There could be no more fitting way to mark my beloved mother’s extraordinary life of service than by granting this honour to a place made famous by its own long and distinguished history, and by the indispensable role it has played in the life of our country,” Charles said in his speech.

“We gather to celebrate this great occasion but also to commemorate the life of Her late Majesty, whose deep love for Scotland was one of the foundations of her life.”

Following his meeting, the King and his wife spent time shaking hands and greeting locals who had come to meet the new Monarch.

Charles appeared delighted as he met with members of the public wearing a traditional Scottish kilt made up of blue red and green which he paired with a white dress shirt and a dark grey vest and suit jacket.

Long red socks, black leather shoes, and Scotland’s national flower, a thistle, which he affixed to his jacket completed the look.

Meanwhile, Camilla wore an enviable royal green trench dress which she paired with knee-high brown boots, leather gloves and a matching leather handbag. For accessories, she kept things classy and simple with a silver brooch and diamond earrings.

Since announcing the end of the Royal Family’s mourning period, a number of changes have already started taking place to officially mark King Charles III’s reign.

Last week, the UK’s Royal Mint revealed the official effigy of the King which is set to appear on coins following his official ascension to the throne.

The effigy was designed by acclaimed British sculptor, Martin Jennings, and received the royal tick of approval from King Charles himself.

Soon after, Buckingham Palace released images of King Charles III’s cypher. The monogram will begin to replace the Queen’s on all state documents, government buildings, and some post boxes.

These changes come just a month before the Royal Family are scheduled to host their first state visit following the death of the Queen.

The upcoming event will be the first time in over 70 years that a King of England has hosted a state visit, and is scheduled to take place on November 22 to 24.