Retired at 25: What’s next for tennis star Ash Barty? 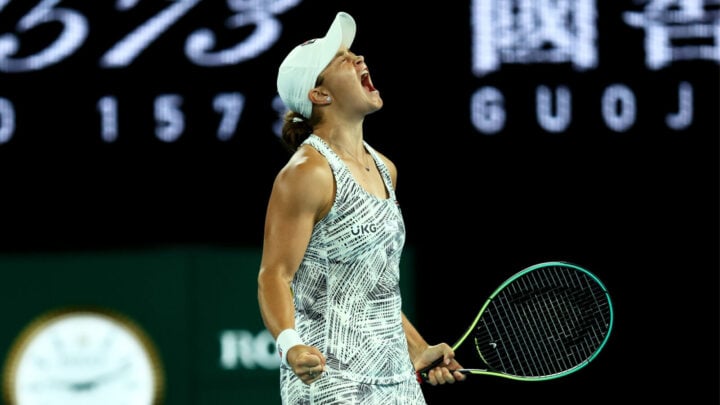 Australia hasn't yet heard the end of Ash Barty, in fact, many fans would say, this is just the beginning of a lifetime of incredible achievements for the sporting great. Source: Getty

She made her professional debut in tennis at just the age of 14 and now eight years on, the whole world knows her name. But after announcing her shock retirement on Wednesday, March 23, fans are left wondering, what’s next for Ash Barty?

Barty began her tennis career in 2010 in an ITF Women’s World Tennis Tour in Ipswich, where she grew up. Over the years, the tennis icon fought hard to earn her place as one of Australia’s tennis greats, copping multiple defeats before ultimately making her tennis breakthrough in 2017 in singles.

Barty quickly become the country’s most promising rising tennis star, securing her greatest achievement of all when she won the Australian Open women’s singles title in January 2022.

Despite her incredible win and her seemingly ever-developing talent, Barty announced her early retirement from tennis on Wednesday, March 23, stating she’d given “absolutely everything that I could to this sport” and that she was “absolutely spent and had nothing more to give”.

Many fans were left disheartened by Barty’s unexpected decision to depart tennis right at the peak of her career, being left to ponder what the 25-year-old has planned for the future. Could there be another sports career on the way? Or could she be planning on starting a family first? What will she do with her time in retirement?

Throughout Barty’s life, tennis hasn’t been the only sport she’s taken a keen interest in. Barty first began her sporting endeavours in netball, playing the sport as a child and enrolling in tennis at the age of four.

Despite enjoying success in professional tennis, Barty announced she was taking a break from the sport in 2014, before making an unexpected switch to cricket.

Barty soon after signed with  Brisbane Heat for the annual Big Bash League season with no real training or previous experience in the sport. She returned to tennis in 2016 where she had her tennis breakthrough the following year where she rose to No.17 in the world.

“She had told me she had played a little bit of backyard cricket growing up and the odd game for her school, so I wasn’t expecting too much. But she must have played and missed less than five times, if at all, throughout that session,” Richards said.

“I’ve been coaching cricket for a long, long time and I genuinely don’t think I had been as excited watching someone play, essentially for the first time. She was playing booming great off drives and, by the time we’d finished, she was trying to clear her front leg and hit it further and further. Cross hand to straight bat in 150 balls was one of the most remarkable things I’ve ever seen.”

“She literally turned up every training session and instead of hitting 200 balls – as most cricketers would – she hit 1,000 balls, just like she would as if she was playing tennis. It changed our whole thought process and the way we designed our batting programme,” Prestwidge admitted.

As for what’s next for the incredible sports star, Barty’s father and former state amateur golf player, recently revealed she’s quite the impressive golf player.

“She’s too good. She can beat me. She’s the best golfer in the house,” Rob Barty said in an interview with AAP.

When asked what his daughter’s next moves were, he admitted he wasn’t sure but that golf could quite possibly be her next sporting endeavour.

“I don’t know what she’s going to do to be honest, but I know she gets a lot of enjoyment out of golf so I think she’ll play (more),” he said.

“But I don’t know what she’ll do (professionally).”

As for Barty’s personal life, the tennis great announced last year, November 23, that she was engaged to long-term partner Garry Kissick, with the couple revealing the good news via seperate social media posts.

In an interview with the Courier Mail this year, Barty revealed she was planning to have the wedding sooner rather than later.

“Hopefully it will be this year,’’ Barty said.

She described her intentions for a “low-key” ceremony spent with exclusive family and friends.

“It will be very low-key, very small, pretty chill, for Garry and I just the people we love the most, people who have been impactful and important in our lives,” she said.

“My nieces and nephews will be front and centre, I wouldn’t live it down if they weren’t, they will be dress shopping before I will be.’’

Australia hasn’t yet heard the end of Ash Barty, in fact, many fans would say, this is just the beginning of a lifetime of incredible achievements for the sporting great.

But whether it’s cricket, golf or family-time next for young Barty, the Australian icon has a reputation for exceeding at everything she does.