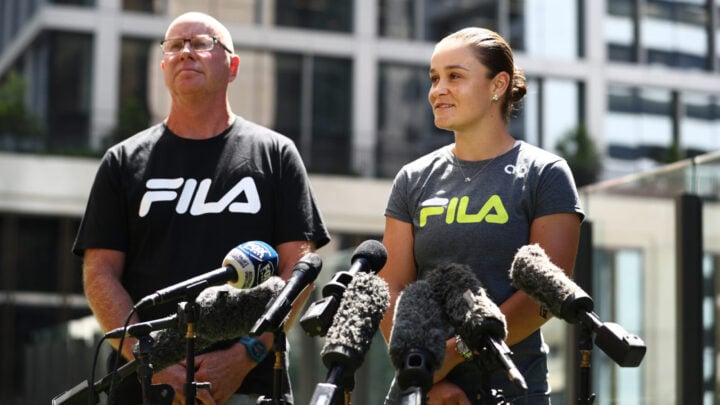 Ash Barty has spoken in a press conference where she held back “no secrets” following her shock retirement announcement on Wednesday, March 23.

The tennis star announced her retirement on social media alongside her former doubles partner, Casey Dellacqua, just two months after winning the World no.1 title.

Speaking at her press conference on Thursday, March 24, the 25-year-old said she had “no regrets” about her retirement.

“I’ve said exactly what I wanted to say,” Barty said.

“I’m an open book. I’m not hiding anything, I’ve got no secrets. I am just so proud of all of the work that I have done with my team.

“We have done this together right from the start, have enjoyed every single minute and we have no regrets.

“We have achieved so much together and it’s been fun on the way.

“I just knew for me the time was right.

Barty said she had reached her limit in the tennis world.

“I’d given absolutely everything that I could to this sport, and I knew that it wouldn’t be fair to my team and the people that have invested so much time and energy into my life to not be 100 per cent committed for them,” she said.

“It’s been a hell of a journey. I wouldn’t change a thing and I certainly have no regrets.”

Barty denied her decision was a cover-up for an injury that saw her pull out of major US tournaments.

“No, that was an old injury that we repeatedly over my career had to manage, and that was the truth,” Barty said.

“After the Australian Open, it just didn’t heal quite as well as I would have liked and I didn’t get to get back on court until a few weeks ago.

“That’s what I mean – we were never hiding anything.

“The fact is I have given everything I can to this sport.

“I’m absolutely spent and had nothing more to give.

“I’m just really excited now for what comes next and I’m excited for the new challenges.”

Speaking with The Today Show, tennis great Pat Rafter commended Barty for “going out on her own terms”.

“The retirement of Ash Barty felt like knowing you had seen your favourite rock band play for the last time.” #9Todayhttps://t.co/kQOz18Lt1s

“I just loved watching her play, to me it’s like watching your favourite rock band finish – you’ll never get to see them again.

“Her finesse and the way she played was rather unique and the girls didn’t know how to play against her.

“To me, she’s still the greatest volleyer in the game at the moment, men or women.”

Rafter said Barty would ease into her retirement compared to stars who are forced into it from things like injuries.

“They struggle with that transition. Ash won’t. She’s gone out and knows what was she wants,” he said.

Many high-profile figures took to Twitter to farewell the tennis star.

@ashbarty I can’t lie I was sad to read your decision but also happy for your new chapter. Always your fan close up and afar. Sending all my love

A champion on and off the court and such a role model.

From Ipswich and the western suburbs of Brisbane to the world stage.

Thank you for inspiring us all to be our best. pic.twitter.com/gG4KXrEbnt

Ngarigo woman Ash Barty is retiring from tennis, but will always be a champion ???????? pic.twitter.com/dJYSLpjjzU

Ash, what can I say, you know I have tears right? My friend, I will miss you on tour. You were different, and special, and we shared some amazing moments. What’s next for you? Grand Slam champion in golf?! Be happy and enjoy your life to the max xo Simo@ashbarty pic.twitter.com/WbX7kXnJ1l

Barty is currently the 14th highest-earning female tennis player, earning a whopping total of $31,920,112 throughout her career.

What's next for Ash Barty?