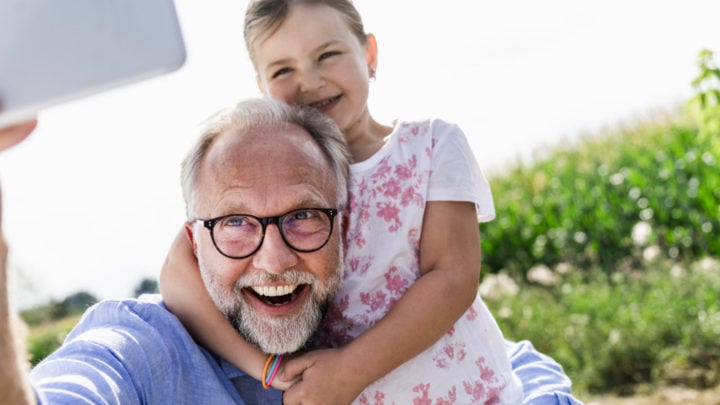 Grandparents have been urged not to post photos of their grandkids online with fears their privacy is at risk. Source: Getty

Grandparents are being banned from posting photos of their grandchildren online, as parents fear they don’t understand how unsafe the online environment can be.

Although Baby Boomers are big users of social media and are eager to stay up to date with new technologies, Millennials say their parents are oversharing.

Instead, they’re asking their Baby Boomer parents to maintain the family’s privacy by keeping their snaps to themselves, or at the very least ask for their permission before uploading them to Facebook. Others have asked grandparents to only post family photos where the children aren’t the main focus and to avoid checking in at places so they don’t share their location with strangers.

Mummy blogger Ravelle Worthington said while grandparents are interested to learn about the ways of social media, it’s taking a bit longer for them to grasp the many dangers of the digital world.

Speaking to The Australian, Worthington said it took a while for her parents to accept that they don’t the extent of what they’re doing on social media, but eventually her father agreed that he didn’t know how dangerous it could be and how much personal information can be shared online – birthdays, birthplaces and location just to name a few.

Other parents are concerned their kids might be embarrassed in the future when they learn of the many childhood photos of themselves online.

She described Facebook as “a toy that he has never read the safety manual for” and that “he just thinks it’s fun and everyone is doing it.”

It’s an ongoing debate between parents and grandparents who struggle to see eye-to-eye on the topic. And for some Baby Boomers, the question still remains; why can’t I post the adorable photo of my grandchild? Because, what grandparent doesn’t want to boast about how amazing their grandson or granddaughter is?

But the dangers are real. Earlier this year Facebook was forced to apologise after up to 6.8 million users potentially had their photos, (some of which were classified private), exposed to other third-party apps.

These included photos shared on Marketplace or Facebook Stories, as well as some that people uploaded but then chose not to actually post due to a loss of signal, or change of mind.

“In this case, the bug potentially gave developers access to other photos.”

As for Heller, he still has hope that he might be allowed to post photos of his grandson every now and then for his friends to see.

“I respect my daughter’s wishes. If she doesn’t want me to post my grandson’s pictures, I absolutely honour that while periodically I may beg her to allow me to post a cute one,” he told The Australian.

Do you post photos of your grandkids online? Have you kids ever told you not to?