‘Show him the door!’ Richard Colbeck under fire after train wreck interview 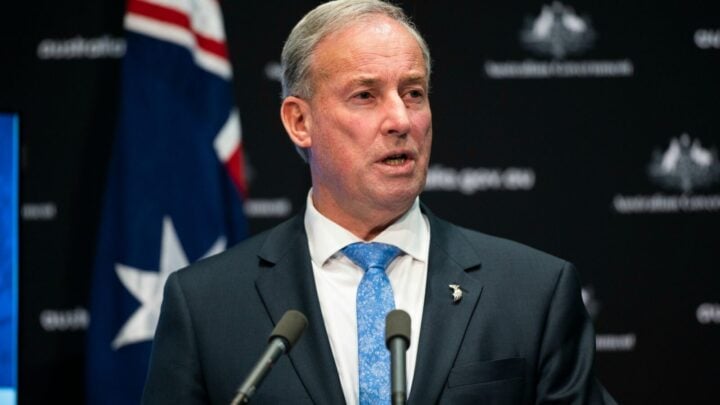 It would appear that Aged Care Minister Richard Colbeck isn’t having a good week, after he was forced to apologise on Friday when he was unable to recall how many aged care residents have died as a result of the Covid-19 pandemic during a train wreck interview on Friday.

The senator was speaking to Labor Senator Katy Gallagher as part of the Covid-19 senate inquiry, when she asked: “How many residents of aged care facilities funded and regulated by the Australian Government have passed away from Covid-19?”

A long pause followed before Senator Colbeck replied with: “I will just have to look up my latest report, Chair, that might take me a moment.”

Finally, after a few more uncomfortable moments, a public servant stepped in and said: “As at 8:00am on 20 August, 258 care recipients had passed away. Of those 254 were residential care recipients.”

Senator Gallagher then fired back saying, “Minister, you weren’t aware of that number?” Colbeck then replied: “I was just trying to find the latest. It wasn’t in the frontline details of those figures. I have got the details, I just couldn’t find it and bring it to hand, I’m sorry.”

Gallagher then asked the minister how many aged care residents are currently fighting for their lives with Covid-19, to which Colbeck responded: “Again, senator, I don’t have the report with the actual detail in front of me. I am looking for the report on my IT system.”

Currently, there are 1,811 active cases in residential facilities across the country.

A cut down version of the Senate committee exchange in which Aged Care Minister Richard Colbeck couldn't say how many aged care residents have died from COVID-19 @abcnews pic.twitter.com/aXdKi443lA

Many Aussies have since taken to social media to slam the minister, with Twitter user @Boeufblogginon, writing: “Colbeck not knowing how many have died and how many are COVID positive in aged care homes under his responsibility is not the good look. He comes across as an uncaring a jot and a total dolt!”

Meanwhile, @botox_3 wrote: “How could he possibly not know the answer to either of those questions?? He’s fronting up to answer questions on government response to Aged Care, of which he is the minister in charge, and he doesn’t even know how many in aged care have died or have covid. Show him the door.”

However, Prime Minister Scott Morrison has since come out saying he has “confidence” in Colbeck, despite his mishap this morning. Speaking in a press conference on Friday, Morrison told reporters: “This is a very demanding environment in which to be working… people are working 24/7 on these issues, and on occasion, and as important as these figures are, 258 people have passed away… I know those issues are not far from his mind on a minute-by-minute basis. I am sure the minister regrets not being able to bring those figures immediately to mind. On occasion, I can’t bring figures to mind.”

It comes a few days after ABC News Breakfast host Lisa Millar grilled the minister over the government’s response to the ongoing crisis in aged care amid the Covid-19 pandemic.

The interview came after Four Corners alleged that “desperate calls” for more staff from Melbourne’s Epping Gardens Aged Care home went unanswered by the government. CEO Greg Reeve told the ABC program that they “tried every agency” as the situation at Epping Gardens – where 162 staff and residents have contracted coronavirus – rapidly worsened.

Referencing Monday night’s program, Millar began the interview by saying that “a lot of the criticism has been directed at Minister Colbeck and his department”.