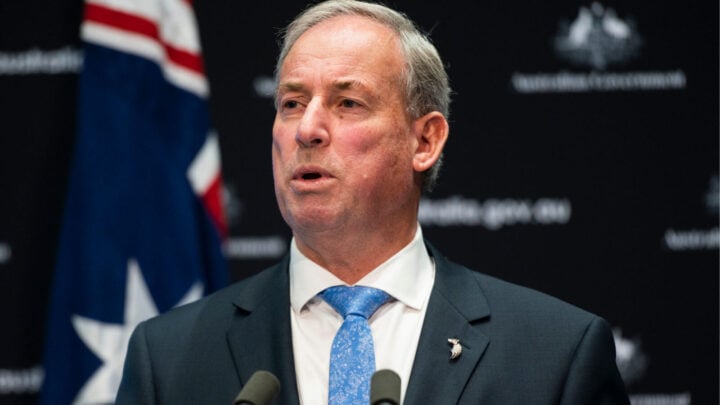 The aged care minister apologised to those who have been impacted by Covid-19 this morning. Source: Getty.

ABC News Breakfast host Lisa Millar grilled the Minister for Aged Care Richard Colbeck on Tuesday morning’s show over the government’s response to the ongoing crisis in aged care amid the Covid-19 pandemic. Currently, there are more than 1,200 active cases in residential facilities across the country, while a total of 228 elderly residents have passed away as a result of the virus.

This morning’s interview came after Four Corners alleged that “desperate calls” for more staff from Melbourne’s Epping Gardens Aged Care home went unanswered by the government. CEO Greg Reeve told the ABC program that they “tried every agency” as the situation at Epping Gardens – where 162 staff and residents have contracted coronavirus – rapidly worsened.

Referencing last night’s program, Millar began the interview by saying that “a lot of the criticism has been directed at Minister Colbeck and his department”. Asked for his response to the Four Corners allegations, Colbeck stated that he was “very concerned” about the way Epping Gardens was being managed.

“We were having issues with cooperation,” he told Millar. “There were clear failings with respect to communications with families, and that’s why the Aged Care and Quality Safety Commission acted to apply a notice to agree because there were a number of things that we weren’t happy about.”

“They had a perception about the way things might be played out. Their expectation was that every COVID-positive patient would go to hospital and that’s never been the position, particularly in Victoria.”

Aged Care Minister @richardmcolbeck addresses the issues in the sector and the Four Corners revelation that calls for more staff to work at Melbourne's Epping Gardens Aged Care home during the height of the COVID-19 outbreak went unanswered.

Millar then moved on to the issue of understaffing, and delivered a scathing question to Colbeck over his department’s response to requests for additional resources: “So you’re saying nothing more could have been done when the CEO contacted federal departments and said, ‘We’re down to one staff member for every 19 residents.’

“It got to a point where it wasn’t safe for the residents and they needed more help and they said that help didn’t turn up.”

However the minister insisted that additional resources were supplied via the government’s surge workforce processes, despite also admitting that staffing levels were not always adequate at the facility. He said: “I’d have to go back through the case notes to look at specific timings. There were periods of time when the level of staffing wasn’t as it should have. But as I said, the entire workforce in Victoria was under severe stress, there were a number of other significant outbreaks in Victoria, and I can tell you our workforce was working round-the-clock.”

Millar then asked Colbeck if he was sorry, to which he replied: “Of course are sorry and we extend our sincere condolences that those who’ve been impacted by the virus, particularly those who’ve lost loved ones. This is a tragic circumstance. This is how devastating this virus is.

Are any of your loved ones in residential aged care?