Republic vs Monarchy: Julia Gillard weighs in on the raging debate 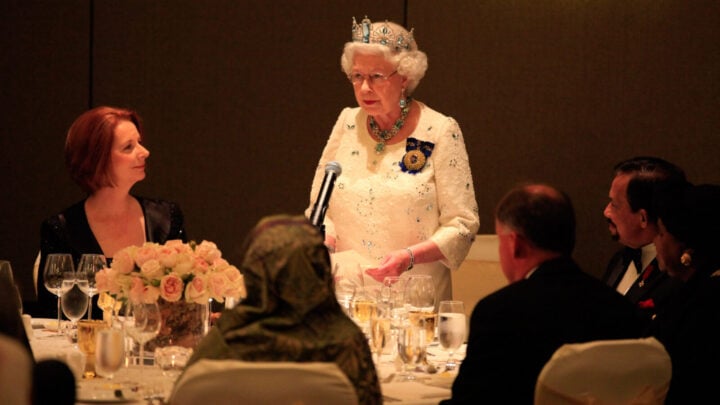 Former Prime Minister Julia Gillard has weighed in on the raging debate around whether Australia should remain a monarchy or become a republic.

Australia’s first and only female Prime Minister has said she has always believed the passing of the Queen would stir up the debate.

I have just disembarked from a long-haul flight to learn the terribly sad news of Queen Elizabeth II’s death. My thoughts are with the Royal Family today and with all those affected by this news. She was a remarkable role model with an incredible dedication to service. pic.twitter.com/yCMtqNi9m2

The republican former politician noted that “it’s certainly too soon for” the discussion, but believes the country will eventually gravitate towards becoming a republic.

“I always thought that when the Queen did leave us that it would cause a period of reflection,” Gillard told the ABC.

“The things that people want to do to honour the Queen, our prime minister being at the funeral on Monday, all of those things need to be worked through and then I think we can have a measured steady discussion, which I think will ultimately take us in the direction of a republic.”

Earlier this week on September 15, Prime Minister Anthony Albanese shut down growing calls from republicans calling for change, saying now is the time for mourning and to show “deep respect and admiration” for the Queen’s service to the country.

Speaking on ABC Radio Sydney, the Prime Minister doubled down on closing the debate, saying we need to focus on the constitutional change around the Voice to Parliament.

“The idea that you would have multiple debates at once I think is not feasible,” he said.

“I’ve made it very clear, and I made it clear before the election, what my priority is. Getting constitutional change in this country is very difficult. We know that that’s the case.

“The idea that you would have multiple debates at once is, I think, not feasible.

“If you think about the counterfactual it, to me, is inconceivable, that the next change that we need for our constitution is anything other than recognising that our national birth certificate, which is what the constitution represents, should acknowledge that our history didn’t begin in 1788.

“We’ve had, I think, substantial debate. I’ve put forward a draft of a question, a draft of what the constitutional change might look like, a very simple change, saying that Aboriginal and Torres Strait Islander people should have a say, at least be able to express an opinion on matters that affect them and that we should recognise Indigenous people in our constitution.

“We should be proud of the fact that we share this continent with the oldest continuous culture on earth, at least 65,000 years of cultural continuance there, and that should be something that needs to be fixed before other matters are debated.”

A poll conducted by independent researcher Roy Morgan found that the majority of Australians want to remain a monarchy, with 60 per cent voting yes, up 5 per cent since the last poll was conducted on the matter in November 2012.