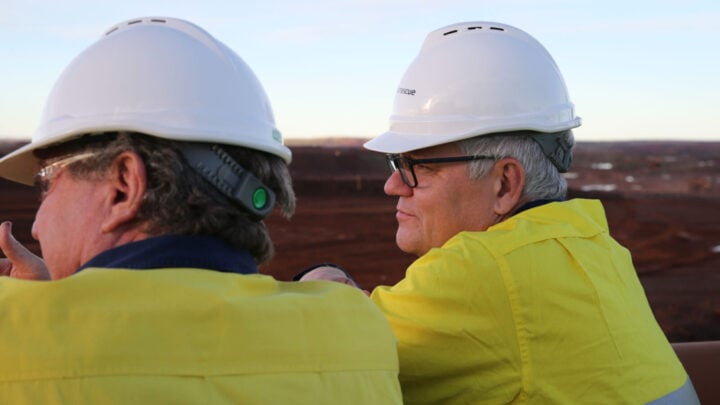 From hard hats to lab coats the PM is no stranger to a photo op, but his latest has everyone confused. Source: Getty

Prime Minister Scott Morrison is no stranger to a photo opportunity, posing in hard hats, fighter jets and laboratories since his initial days in office, but when these promotional occasions go wrong, Australia really takes notice.

Over the years Morrison has copped criticism for the frequency of his photo ops, which many pundits say is simply a ploy to boost public opinion.

During his time in power, the handy PM has been snapped using an industrial sewing machine, diligently doing something with test tubes in vaccine labs, looking ready to fly in the cockpit of a jet, and wearing an array of job-specific headwear. However, it’s his latest photo that has caught the attention of eagle-eyed members of the public, who’ve taken to Twitter to share their thoughts on the hilarious fail.

The picture, which was first shared on Twitter by Anika Wells, Labor Member for Lilley, shows the prime minister posing with a hammer in hand, nailing a piece of gyprock at a construction site in Brisbane’s north. While the photo appears normal, the public was quick to notice that it appears the PM either has terrible aim, or is pretending to hold a nail just for the picture.

This PM is all photo opp, no follow up: your photographic guide from his recent sojourn to Lilley????????

Twitter users proceeded to slam the PM for posing for the shot purely for the press, with one user saying that Australia deserves “better than this”.

Only the Prime Minister of Australia literally pretending to nail up a bit of gyprock for a photo op…I used to believe that Australia deserved better than this bullshit but we keep voting for it and I’m starting to think we don’t… pic.twitter.com/ebR2ThNebv

Many users believed the PM was pretending to hold a nail, others pointed out that he was aiming for the nail just below his hand. While some jumped to his defence many highlighted his “poor technique”.

One user wrote: “I get he’s posing with the nail below… albeit with poor technique according to tradies (sic) in my mentions… & PMs have been doing photo-ops since Adam, I’ve got a photo of Frazier & “Sir” [John] visiting our school somewhere but only Scott Morrison has made photo-ops his actual job.”

In January 2019, Morrison was embroiled in a hilarious, albeit embarrassing, editing fail in a professional photo of him and his family. The picture was shared on the Australian prime minister’s official website, which showed him wearing cream trousers and a blue-and-white chequered shirt, however, it was his feet that caused some fans to look twice.

Having zoomed in to get a better look, several people immediately began sharing photos of the bizarre footwear – quickly realising the PM appeared to be wearing pristine white cartoon sneakers, which had been carelessly photoshopped on and appeared to fit two left feet.

In response to the fail, Morrison shared a photo of his actual shoes to Twitter, writing, “Message to my Department (PM&C): I didn’t ask for the shoeshine, but if you must Photoshop, please focus on the hair (lack thereof), not the feet! ???? Here they are in all their glory — my footwear of choice whenever I can get out of a suit.”

Just a few months later, Scott Morrison was involved in another photoshop fail when his social media team posted a series of Star Wars-related images prior to the election. At the time, a photoshopped image of the prime minister was posted on the Liberal Party’s official Twitter account, showing Morrison dressed as Star Wars favourite Luke Skywalker, with the caption: “The economy is strong with this one.”

Later, they also shared an image of then Labor Party leader Bill Shorten pictured as Emperor Palpatine — the main antagonist of the popular franchise — with a Death Star in the background. The caption reads: “Last time they were in government, Labor delivered 6 record deficits totalling $240 billion. Australia can’t afford to go back to Labor.”

What's your take on the photograph? Is Morrison aiming at the nail, posing for the camera or something else?