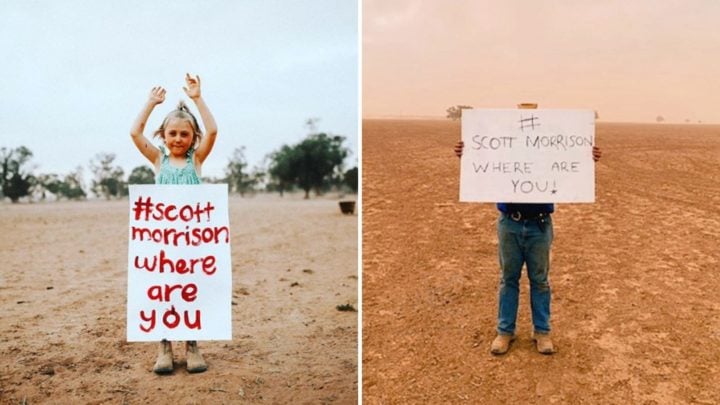 Farmers are sharing horrific photographs of the impact of the drought on social media, along with the hashtag #scottmorrisonwhereareyou. Source: Instagram.com/thewestiswaiting

As one of the worst droughts in Australian history continues to impact people all across the country, farmers are calling on Scott Morrison to shift more of his focus on the dry conditions impacting eastern parts of Australia. While people across Queensland, New South Wales, Victoria and Tasmania are praying for more rain to ease the impact of the dry conditions already, there are also calls for the PM to step up his efforts to assist those in need.

A new viral Instagram page called ‘The West is Waiting’ was launched earlier this week and is already gaining traction online. Farmers who set up the campaign said the purpose is to flood the internet with images of people, places and business that have been, are being, or are about to be, destroyed by the drought.

Farmers are encouraging those impacted by the harsh conditions to use the #scottmorrisonwhereareyou hashtag on social media and share their images and stories. The aim is for the gut-wrenching photographs to go viral and capture Morrison’s attention.

“What help do we want? FINANCIAL HELP. Pats on the backs and bush spirit are no longer enough to keep the doors open,” a post on the page read. “This movement is for the people and by the people. It shows no boundaries or limits. If you are affected physically, emotionally, financially or mentally, this is for you.”

The farmers said that big businesses, small businesses, communities, farms and townships have all been impacted by the drought and by Monday, they want the hashtag to be displayed in shop windows, mailboxes, car windows and everywhere else possible to gain the PM’s attention.

People across Australia have already started using the hashtag on social media, with hundreds of pictures already being uploaded in a matter of days. One shocking photograph shows a farmer and his sheep on dry grass. Another shows a person’s lawn that was once green turned to nothing but dust, while others have simply shared photos of them and the hashtag at their property.

It comes as the Minister for Water Resources, Drought, Rural Finance, Natural Disaster and Emergency Management David Littleproud announced that a group of eminent Australians has been established to help deliver $100 million in drought resilience and preparedness programs to communities every year through the Future Drought Fund. Hailed the Future Drought Fund Consultative Committee, Littleproud said the committee would develop the Drought Resilience Funding Plan for the Fund, which begins with a $3.9 billion credit that will grow to $5 billion.

“The Australian Government is getting on with the job of building nationwide drought resilience. The Future Drought Fund was established to give drought-prone Australians the best tools to plan and prepare for drought and sustain their livelihoods and communities,” Littleproud said on Tuesday. “To ensure best use of the Future Drought Fund, the Consultative Committee will seek input directly from drought-vulnerable communities for the Drought Resilience Funding Plan.”

He added that the committee is made up of people with track records of success in agricultural economics, managing climate risk, rural and regional development and natural resource management. They’re also from rural and regional communities across the country.

The PM announced the funding allocation of $5 billion last October, which he said would help rural workers through “non-rainy days in the future”. The sum of $3.9 billion dollars will increase to $5 billion within 10 years and just $100 million will be released each year from July 1, 2020.

Of course, it’s not the first time people have taken to social media to share their horror stories from the drought, with an Australian mum making headlines earlier this month by comparing the situation to “Armageddon”. Penny Lamaro took to Facebook and said that her eyes are stinging “with the dreams and hopes of small families trying to ‘make it’ on the land”.

“I am choking on the soil that is their past, their present and any future they have,” she wrote. “I am out here trying to see if I can help the many who have crumbled under the weight of death and loss. But I feel like I need saving myself. And now the new and very real threat of fire. Can dirt burn? Ironically the parched earth makes fires faster and more erratic. People have even less time to gather the detritus of their lives. Less time to keep each other safe. Less chance. Less luck.”

As a battler herself, the mum continued by explaining how her spirit is fading as the days go on and the family struggles to make ends meet. Thinking about the future of her daughter, Penny said it’s hard for some to understand the devastation and that it’s the little things that are getting them by at the moment, with fears the hardest times are still to come.

What do you think needs to be done to help those in need?