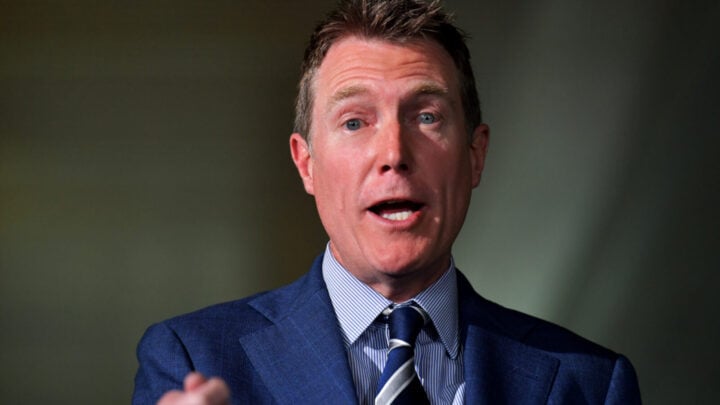 The identity of the federal Cabinet minister who’s at the centre of an historical rape allegation has been revealed to be Attorney-General of Australia Christian Porter.

News broke earlier this week that a Cabinet MP had been accused of a rape in the 1980s – and that many of his colleagues have known about the accusations for years. Now, a tearful Porter has broken his silence on the sensitive matter, telling reporters on Wednesday afternoon that the claims are simply false.

“I just wanted to start by saying something to the parents who are grieving for the loss of their adult daughter,” he began. “I only knew briefest periods. [We met] at debating competitions, when we were teenagers about 33 years ago, I was 17 years old, and I think that she was 16 years old.

“In losing that person, your daughter, you suffered a terrible loss. And I hope that whatever else happens, from this point that you understand that in saying today that the things that have been claimed to happen did not happen that I do not mean to impose anything more upon your grief. But I hope that you will also understand that because what is being alleged did not happen, I must say so publicly.”

Porter went on to say that he has no plans on stepping down from his role as attorney-general, however he’ll be taking some personal leave, saying, “I have discussed with the Prime Minister today that after speaking with my own doctor I am going to take a short period of leave to assess and hopefully improve my own mental health.”

The ABC’s Four Corners program reported on Friday last week that Prime Minister Scott Morrison had received a letter detailing accusations against the MP and calling for the PM to establish an independent investigation into the assault.

It’s the second rape allegation to rock Canberra in a matter of weeks, following allegations by former Liberal staffer Brittany Higgins, who says she was raped by a colleague in Defence Minister Linda Reynolds’ office in March 2019.

The new letter, which was written by a group of the alleged victim’s friends and sent to the PM on what would have been her 50th birthday, alleged the victim was raped in 1988 when she was just 16 years old. The alleged incident occurred before the MP entered politics.

New South Wales police have confirmed the alleged victim contacted the child abuse and sex crimes squad in February 2020 about the alleged assault. She took her own life a few months later, in June.

It’s not the first time Porter has found himself in hot water in recent months. A controversial Four Corners episode, which aired in November last year, alleged that Porter had intimate relations with a female staffer. However, at the time, the MP denied ever breaching the ministerial standards.

Meanwhile, Porter also raised some eyebrows five years ago, when it came to light that when a contender for Cleo magazine’s Bachelor of the Year Award in 1999 he had drawn a stick figure of himself with large genitals as part of his self-portrait award entry. He made light of the incident when questioned by The Daily Telegraph in 2017, saying “I’m not much of an artist — and, yes, there was a lot of wishful thinking in that picture”.

Porter, 50, has been married twice, and in January 2020 he split from his second wife Jennifer Negus, with whom he shares two children.