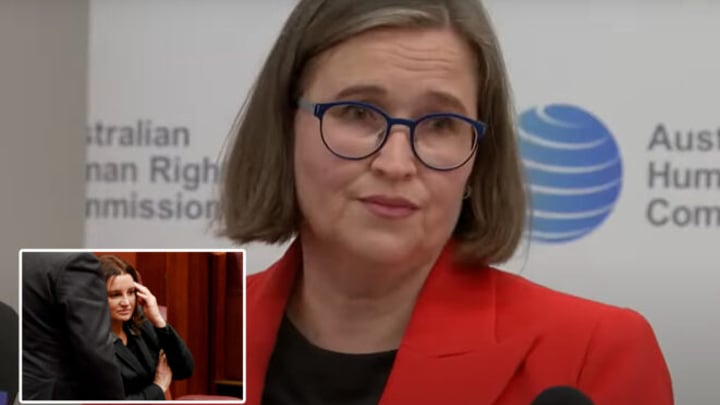 Shocking accusations have been made this week over male senators allegedly making ‘growling noises’ at Senator Jacqui Lambie, as she spoke during question time, on Tuesday, November 30.

The Senator accused of growling at Lambie, Liberal David Van, was pulled up on this behaviour by other female senators, Greens Senator Sarah Hanson-Young, and Labor’s Penny Wong, just hours after an absolutely damning report was handed down into the “toxic” workplace culture of Parliament House.

Lambie rose during question time to ask a question about housing affordability. Senator Lambie asked the Minister for Housing, Senator Simon Birmingham, “what action will you (the government) take instead of having just another talkfest?”

A back and forth emerged, where Birmingham answered Lambie, and Lambie asked a supplementary question of Birmingham. Then, as Lambie asked a second supplementary question, providing content for the number of people who are in need of secure, affordable housing in Tasmania right now, Lambie was interrupted by numerous Senators allegedly making growls and inappropriate noises.

Immediately, Senator Hanson-Young rose on a point of order, to vocalise concerns about the alleged incident, sharing with the Senate that she felt these noises being made by an at-the-time unknown Senator, were immensely inappropriate, especially considering that Senator Kate Jenkins had, just that morning, handed down disturbing findings of the “Jenkins Review’, as Prime Minister Scott Morrison has referred to it.

The Jenkins Review, or more formally known as the Australian Human Rights Commission’s Report on the Independent Review into Commonwealth Parliamentary Workplaces, was built after several allegations of “toxic parliament culture” and sexism rocked Canberra earlier this year.

The Review explored allegations of misconduct, including bullying and sexual harassment or assault. Considering Lambie is a woman, these animalistic interruptions were, as noted by Hanson-Young, “inappropriate”. Hanson-Young said: “I don’t think it’s appropriate, given what has been handed down today, to have growling and dog noises coming from this side of the chamber while a female member in this place is on her feet. It happened. I don’t know who was responsible for it, but it is inappropriate and if we’re going to change culture from the top then that means all of us.”

As Hanson-Young closed her point of order, the President of the Senate, Senator Slade Brockman began saying that he did not hear the interjections made by the unnamed Senator. This incensed Senator Penny Wong, who then rose to make her own point of order about the incident.  Wong said “Well, I did hear it, because I in fact said, ‘Who’s growling?’ I would ask one of the senators at that end perhaps to do the right thing and withdraw. At least fess up!”

To this, many senators interjected, as Wong continued “Gee, you’re tough, aren’t you? You’re happy to dish it out but you’re not happy to take responsibility! I mean, really—”

The President cautioned Wong, to which Wong said “Growling, Mr President!” The President then replied, “Senator Wong, I certainly did not hear anything—”

Wong finished, simply saying:  “I did.”

The President concluded “Senator Wong, I’m not challenging what you heard. I certainly did not hear it. I cannot ask someone to withdraw something I did not hear.”

This garnered a rowdy reaction from the Senate, with Senators Molan and Wong both interjecting. The President then issued a warning to the Senators, saying “Senator Molan and Senator Wong! Interjections, as everyone in this chamber has heard on many, many occasions, are disorderly. I did call a senator who interjected across the chamber on my right to order. I did not hear the particular incident that you have raised. If it occurred, I would ask the senator involved to reflect upon it and to withdraw if they did do what has been stated. However, I did not hear the particular interjection myself. I think I’m calling the minister.”

It seems that the Senator who did interject on Lambie with growling noises took this advice from President Brockman seriously. Just three hours later, Senator David Van asked to “make a personal statement to the Senate”.

Van’s commitment to holding himself to higher standards aligns with the five key shifts recommended by the Jenkins Review.
As Jenkins delivered the Review, she said, “We found current systems and reward structures encourage, tolerate and enable misconduct and processes that are not equipped to prevent or address the consequences of that behaviour.”

“There is a stark contrast between the complexity and gravity of the work being done in parliamentary offices and the lack of sophisticated workplace structures and practices to support this work,” Commissioner Jenkins said. “That can and should change.”

Van’s admission of missing the mark, and commitment to holding himself to a higher standard in the future is surely one great step towards a safer, less sexist Parliament.

You can read the full Jenkins Review here, or watch it below.