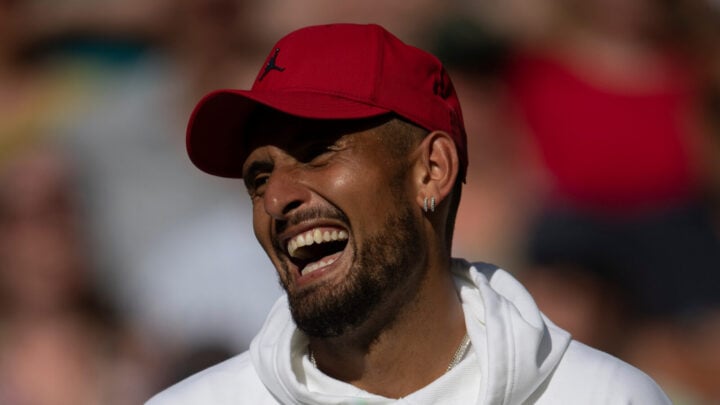 Australian tennis star Nick Kyrgios has been accused of playing “dirty tennis” during an unexpected verbal attack from the mother of tennis rival Stefanos Tsitsipas.

The fiery showdown between Kyrgios and Tsitsipas at Wimbledon had the tennis world in an uproar after the pair were both slapped with fines for their on-court behaviour, with the Greek player cited for unsportsmanlike conduct and the Aussie fined for an audible obscenity.

“The only person who confuses Stefanos is Nick Kyrgios,” she told the Greek City Times.

“He is the only one who brings him out of himself.

“In the Wimbledon match, Kyrgios decided to ignore the general rules of sports. The match became very strange and nervous because he was playing ‘dirty’ tennis.

“Stefanos doesn’t play like that. He completely lost his temper due to the behaviour of his opponent and lost the match without being any worse on the court.”

Not one to take the sledge lying down, Kyrgios reportedly posted a video to social media in which he is shown delivering a winning shot against Tsitsipas alongside the caption, “Dirty tennis”.

Apostoli isn’t the only one taking aim at Kyrgios with the 27-year-old’s performance during the infamous Wimbledon face-off attracting the ire of outspoken media personality Piers Morgan.

Morgan took aim at Kyrgios during the British talk show host’s program Uncensored where Morgan stated that the “full range of Kyrgios the brat” was on display during the Aussie’s third match.

Introducing the segment, Morgan referred to Kygrios as “one of my least favourite people”.

“Nick Kyrgious has booked his spot in Wimbledon after making a Lazarus-like recovery from the crippling shoulder injury which he was using to blame every point he lost earlier in the game,” Morgan said.

The controversial broadcaster showed a highlight reel of “nasty nick” giving attitude to umpires and fellow player Tsitsipas, where Kyrgios uses the word “bro” in his verbal retorts.

Morgan ended the reel with “you know what bro – you’re my douche of the day, every day”, before bringing in other voices of support to speak against Kyrgios’ childish behaviour.

Those who disapprove of Kyrgios’ on-court antics may not have to suffer them much longer given that World No. 21 recently hinted that he may be hanging up his racquet and stepping away from the tennis court.

Kyrgios hinted at a possible early retirement during a recent question-and-answer live stream on social media.