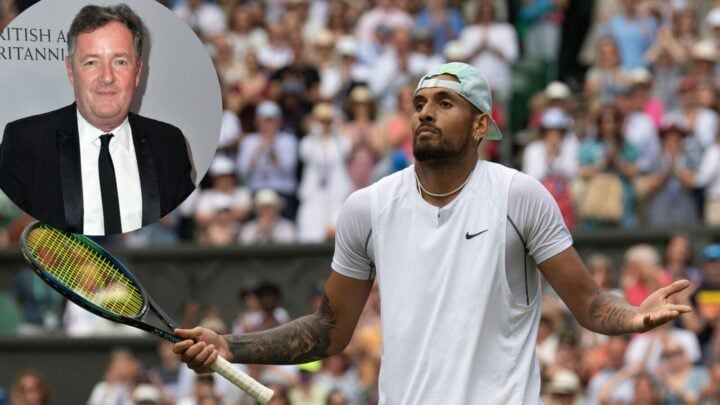 During a heated match with Greek Stefanos Tsitsipas, Morgan said the “full range of Kyrgios the brat” was on display during the Aussie’s third match.

Kyrgios and Tsitsipas were both slapped with fines for their on-court behaviour, with the Greek player cited for unsportsmanlike conduct and the Aussie fined for an audible obscenity.

Introducing the segment, Morgan referred to Kygrios as “one of my least favourite people”.

“Nick Kyrgious has booked his spot in Wimbledon after making a Lazarus-like recovery from the crippling shoulder injury which he was using to blame every point he lost earlier in the game,” Morgan said.

The controversial broadcaster showed a highlight reel of “nasty nick” giving attitude to umpires and fellow player Tsitsipas, where Kyrgios uses the word “bro” in his verbal retorts.

Morgan ended the reel with “you know what bro – you’re my douche of the day, every day”, before bringing in other voices of support to speak against Kyrgios’ childish behaviour.

“As far as gamesmanship, cheating, manipulation, abuse, aggressive behaviour to umpires, to linesmen … he was lucky to even get through the first set, he should have been defaulted in the first set,” Cash said.

“Something’s got to be done about it, it’s just an absolute circus.”

Kyrgios has advanced to the Wimbledon quarter-finals after beating American Brandon Nakashima in a five-set win on Centre Court.

“He was playing really well. I wasn’t playing that great. But I was almost enjoying the competitiveness,” Kyrgios said.

“That’s probably the first time in my career where I wasn’t playing well. Regardless of playing Centre Court Wimbledon, fully packed crowd, I was able to just say, ‘Wow, look how far I’ve come’, to myself. I was bouncing the ball before I served. I really just smiled to myself. I was like, ‘We’re here, we’re competing at Wimbledon, putting in a good performance mentally’.”

Back in the #Wimbledon quarterfinals for the first time since 2014 ????

Kyrgios hit back at his critics, saying he knew his qualifying performance would annoy a lot of people.

“I sit here now in the quarter-finals of Wimbledon again, and I just know there’s so many people that are so upset,” Kyrgios said.

Kyrgios will face off against Chile’s Cristian Garin for a place in the Wimbledon semi-finals.