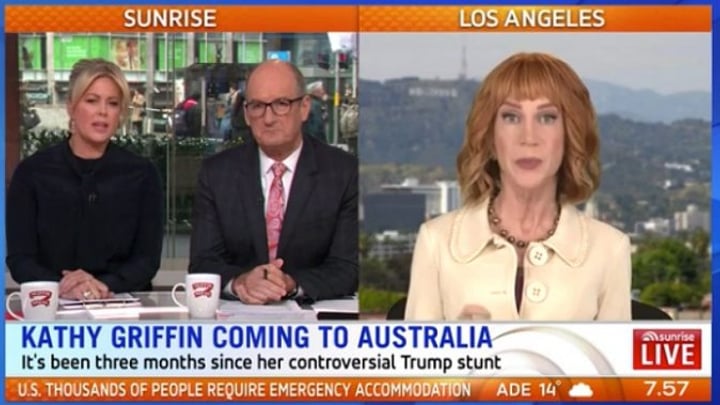 US comedian Kathy Griffin made a fiery appearance on Sunrise this morning, declaring she no longer felt bad about her ‘headless Trump’ stunt and telling the show’s co-host Samantha Armytage to “cut the crap” when she questioned her about it.

Griffin was on Sunrise to promote her new tour Down Under, but quickly went on the attack after being asked if she regretted staging the now-infamous photoshoot in May where she held up a fake, bloodied severed head resembling the US president.

“You’re full of crap,” she shot at Armytage. “Stop this. You know this. Stop acting like my little picture is more important than talking about the actual atrocities that the President of the United States is committing.”

Griffin faced a storm of controversy after the photo was released and lost her job at CNN. Her American tour was cancelled and she was criticised by her peers and the White House.

She issued an apology just days later, but now says she takes it back and that the backlash she faced was “blown out of proportion”.

“No, I don’t apologise for that photo anymore and I think the outrage is complete BS because we have real things to deal with,” she told Armytage and the show’s co-host David Koch.

“But I’m in trouble according to you, Sam, way to take my back girl.”

Armytage interjected that she was just doing her job as a journalist, but Griffin shot back: : “I’m going to meet you in an alley.”

“No I got it,” she said. “I got your number. You’re like a white Trump voter in America. I got your thing.”

Read more: Melania makes the most of her assets with pricey reversible dress

The fiery encounter was just the latest in a long line for Griffin, who has been an outspoken critic of President Trump since he took office.

While other celebrities have joined her in criticising the president, Griffin says former friends actress Debra Messing and Chelsea Clinton have shunned her since the photo went viral.

What are your thoughts on this? Was Samantha right to question Griffin on this? Or does Griffin make a good point?