‘I’m going to take a moment’: Tracy Grimshaw fights back tears after paying respects to the Queen 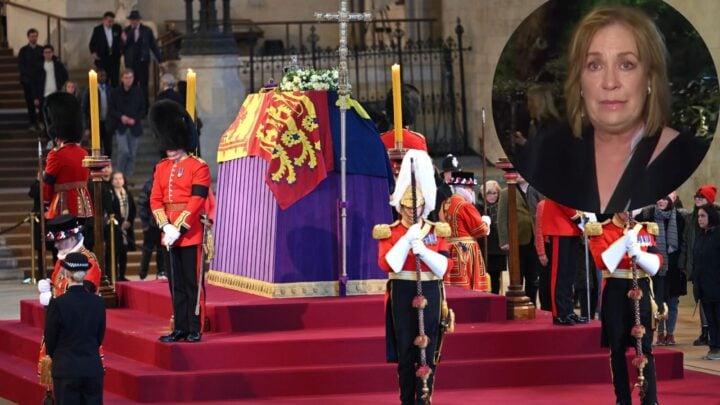 Tracy Grimshaw gets emotional as she relays the scenes in Westminster Hall. Source: Getty

Long-standing A Current Affair host Tracy Grimshaw was overcome with emotion following her visit to Westminster Hall in London where the expert journalist was able to pay her respects to the late Queen Elizabeth II.

Leaving the hall where the Queen’s coffin is Lying-in-State and looking visibly moved, Grimshaw was at a loss for words as she took a moment to compose herself.

The veteran journalist held a finger up to the camera as she choked back tears, expressing that she needed a second as she turned away from the camera.

“I don’t know what I was expecting, we had half an hour in there.

“As [people] walk past they only have a moment. They dip their heads, some of the women curtsy.

“Soldiers in khakis stopped and saluted her … it is a majestic building and it’s sombre.

“It’s actually not sad, these are no sad tears, they’re tears that recognise what people are feeling as they are going in there.

Grimshaw noted that since her death on September 8, the Queen is still fulfilling her royal duties.

“I think she’d just really like to get back to her husband,” she said.

Grimshaw’s report on the Queen’s funeral processions will be some of the journalist’s final career moments with A Current Affair, as she announced that she would be stepping down from her role as host, following an impressive 17 years behind the desk.

The beloved Australian reporter shocked fans with the announcement at the end of A Current Affair’s Monday, September 6 show.