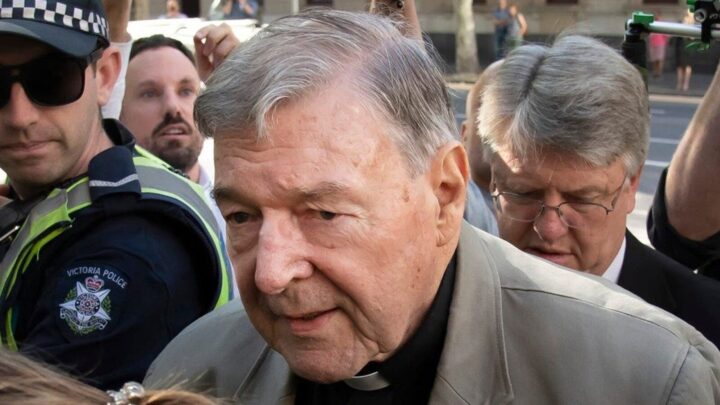 Cardinal George Pell's convictions were quashed by the High Court of Australia in 2020. Source: Andy Brownbill/AP

The father of a former choirboy, who was allegedly sexually abused by Cardinal George Pell, has launched legal action against Pell and the Catholic Church, claiming he had suffered psychological injury after learning of his son’s alleged abuse.

In 2018, Pell was found guilty by a Country Court jury for abusing two teenage choirboys in the 1990s when he was the Archbishop of Melbourne.

During the trial, one of the former choirboys gave evidence alleging he and his friend were abused after Sunday mass by the church leader.

However,  the 81-year-old was acquitted in 2020 when the high court quashed the convictions in a unanimous decision allowing the cardinal-who has continuously maintained his innocence– to walk free.

The second choirboy died in his 30s in 2014 from an accidental drug overdose and never made a complaint against Pell. But now, the man’s father has lodged a civil case in Victoria’s supreme court, seeking damages against the Catholic Archdiocese of Melbourne and Pell.

According to court documents, the man- who cannot be named for legal reasons- has suffered from chronic adjustment disorder and persistent complex bereavement disorder, with mixed anxiety and depression since finding out about his son’s sexual abuse allegations.

He is claiming general damages, special damages, and compensation for “past loss of earning capacity and past and future medical and like expenses”.

In an interview with The Age in 2019, the father revealed how his son became withdrawn as a teenager and began using drugs before he had a few stints in jail as an adult.

“Really, I do blame George Pell. I feel that he has taken my son away from me,” he said.

“And it’s not only me but it’s his sister and his mother. We’ve all missed out on him. Why? Why?”

During a brief hearing on Thursday, July 14, Justice Michael McDonald had asked the church’s lawyers whether they were going to rely on the “Ellis Defence”.

The so-called “Ellis Defence”, which prevents child sexual abuse victims from suing the Catholic Church, was abolished in Victoria in 2018.

It is currently unclear whether this defence can be used in cases brought by people who claim to be secondary victims, including families of the alleged victims.

The archdiocese’s barrister, Geraldine Gray, has told the court the church had not yet decided whether it would use the “Ellis Defence”.

“If the Ellis defence isn’t going to be taken, the proceedings would go ahead,” McDonald said.