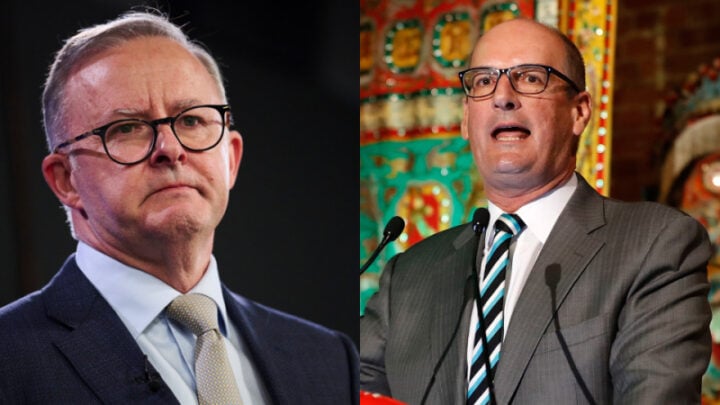 Koch accused the Prime Minister of breaking two election promises that he had made to the Australian public - including wage increases and slashing the cost of power bills. Source: Getty Images.

Prime Minister Anthony Albanese has received a grilling from Sunrise host, David “Kochie” Koch, who accused Albanese of breaking his election promises following the reveal of the Federal Budget.

This year’s budget winners included families, healthcare as well as some sweeteners for seniors to help relieve the current cost of living crisis.

Factors of global uncertainty such as the war in Ukraine and recent flooding disasters along south-east Australia have led the government to release a budget that they considered “solid, sensible and suited to the times”.

Koch held a different view, accusing the Prime Minister of breaking two election promises that he had made to the Australian public – including wage increases and slashing the cost of power bills.

“Now, those two in this budget are a fail,” Koch put to Albanese on Wednesday’s, October 26 broadcast.

“What do you say to voters … you have broken two promises?”

Albanese rejected Koch’s statement, reminding viewers that under the Labor government minimum wages have increased by 5.2 per cent.

Undeterred, Kochie circled back to Albanese’s previous claims that consumers would save hundreds of dollars on power bills.

“The Ukraine war has been going a fair while. We knew this was happening.”

Albanese acknowledged that the war in Ukraine had contributed to rising global energy prices but also took the opportunity to point the blame at the previous government for their “failed energy policies”.

“One [reason] is the Ukraine war, which has been going on for some time, that has flowed through into global prices,” Albanese explained.

“We know global energy prices have fed into global inflation.

“In our competitors, many of them are looking at double-digit inflation. You are aware of that pressure.

“As well as that, we had 10 years of failed energy policies, we saw four gigawatts leave the system, and only one go back in. If you have less supply, that has an impact on price. That is why we are dealing with that through our Powering Australia Plan.”

Koch then put it to the Prime Minister that he “shouldn’t have made the promise” if he “couldn’t pull it off”.

Co-host, Natalie Barr then joined the heated debate, claiming the Australian public voted for Albanese based on the premises he made during the campaign.

“When it comes to power prices, there are real pressures out there,” Albanese explained

“We understand people are doing it tough. We understand the power price issue is a difficult one. That’s why we’ve flagged the preparedness for further regulatory reform.”

Koch’s clash with the Prime Minister certainly isn’t the first time the morning show host has clashed with a politician.

Earlier in 2022, Koch blasted the then defence minister Peter Dutton over his efforts in relation to the flood-devastated areas of Northern New South Wales (NSW) at the time.

In an interview on Sunrise on Tuesday, March 7, Kochie criticised Dutton for leaving “ordinary Australians” in Lismore, NSW, to fend for themselves as many residents were left isolated as a result of the devastating floods.

“Are you embarrassed that ordinary Australians are having to do so much?”@Kochie_Online quizzes Defence Minster @PeterDutton_MP over the federal government’s response to the northern NSW flooding clean-up. pic.twitter.com/JSWwtrQwh8

Dutton had promised thousands of Australian Defence Force (ADF) personnel would be deployed to areas where residents were isolated, however, Kochie was unsatisfied with the amount of time it was taking for the personnel to hit the ground.

“God help us if we were going to war, we wouldn’t stand a chance if it took this long to get ourselves organised,” Kochie sated at the time.