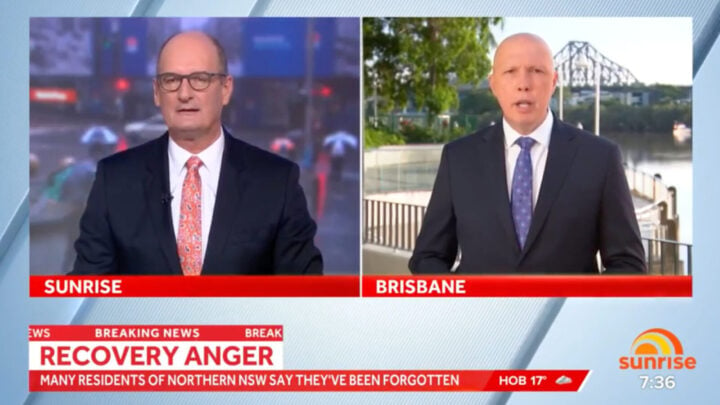 In an interview on Sunrise on Tuesday, March 7, Kochie criticised Dutton for leaving “ordinary Australians” in Lismore, NSW, to fend for themselves as many residents remained isolated as a result of the recent floods.

Dutton had promised thousands of Australian Defence Force (ADF) personnel would be deployed to areas of isolated residents, however, Kochie was unsatisfied with the time it was taking for the personnel to hit the ground.

“God help us if we were going to war, we wouldn’t stand a chance if it took this long to get ourselves organised. What’s going on? Why aren’t they there quicker?” asked Kochie.

Dutton defended himself, telling Kochie that 760 ADF personnel were already positioned on the ground, with up to 5000 personnel expected by the end of the week.

Kochie went on to grill Dutton, asking if he was “embarrassed that ordinary Australians are having to do so much work in this.”

“Ordinary Australians are having to get themselves to remote areas in their dingies, wading through flood waters to help people, to take them food and to make sure they’re alright,” he said.

Despite Kochie’s persistent criticism, Dutton stood strong in his defence, arguing that this was simply “the Australian spirit.”

“Are you embarrassed that ordinary Australians are having to do so much?”@Kochie_Online quizzes Defence Minster @PeterDutton_MP over the federal government’s response to the northern NSW flooding clean-up. pic.twitter.com/JSWwtrQwh8

“That’s what you and I would do for our neighbours and it’s what people do in extremist,” Dutton replied.

“So no, I’m not embarrassed by that.”

Kochie cut in again, somewhat conceding in his previous comment.

“Absolutely… and we want the ADF to do that as well.”

Dutton then argued the ADF was, in fact, aiding Australians, and that he wouldn’t stand for criticism of the personnel.

“And the ADF is doing it and I’m just not going to cop criticism of the ADF,” he said.

Lismore is being regarded as the worst hit NSW city by the recent severe floods, which first hit the state on February 28, 2022.

Since then, thousands of residents have been evacuated from their homes, and many more remain isolated without access to essential supplies.

On Monday, March 7, 637 ADF personnel were deployed in northern NSW with another 656 due by Tuesday night, March 8.

ADF personnel had been present in Lismore since February 27 where they provided air support to flood-affected areas, made possible when the Federal Government activated the Commonwealth disaster plan enabling military assistance.