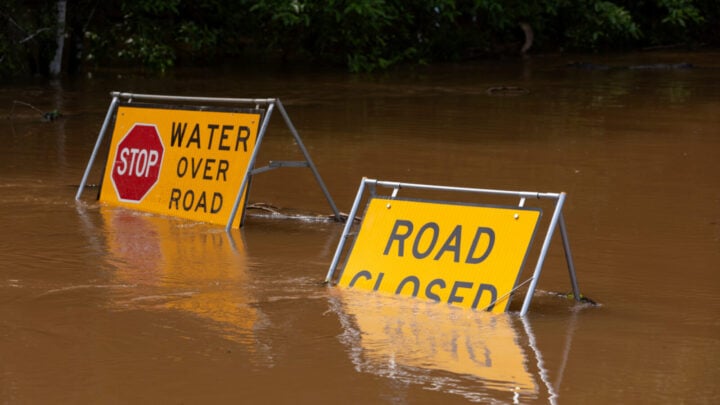 Parts of NSW have been advised to prepare for a renewed flood risk on Tuesday - threatening falls of up to 200mm.

New South Wales residents have been warned to brace for yet another dangerous 48 hours as a second wave of wild weather threatens to lash the state.

Further warnings continue to be made as residents from Central Coast to the Illawarra, Blue Mountains, Shoalhaven and Metropolitan Sydney were advised to prepare for a renewed flood risk on Tuesday – threatening falls of up to 200mm.

So far, there has been six recorded deaths in NSW as a result of the floods, with the Resilience NSW Commissioner Shane Fitzsimmons, reiterating that the state has “got to brace” for further deaths, with many of the towns still cut off by floodwaters and as the threat of further intense weather looms.

“Locally intense rainfall leading to dangerous and life-threatening flash flooding is possible with thunderstorms, six-hourly rainfall totals in excess of 150 mm are possible,” the website warned.

“Damaging gust winds with peak gusts in excess of 90 km/h are possible over the Sydney Metropolitan, South Coast, Illawarra and Southern Tablelands districts, including the ACT ranges. The risk of damaging wind gusts is expected to persist into Wednesday.”

NSW has already faced a wave of drastic weather, after severe storms and flash flooding first tore through the state on February, 28, with ferocious weather continuing through NSW over the past week.

NSW Premier Dominic Perottett admitted on Saturday, March 5, that aspects of the state’s emergency flood response were “unacceptable” and residents should not have had to rely on civilian rescuers to survive.

“We’ve got to learn from this,” he said.