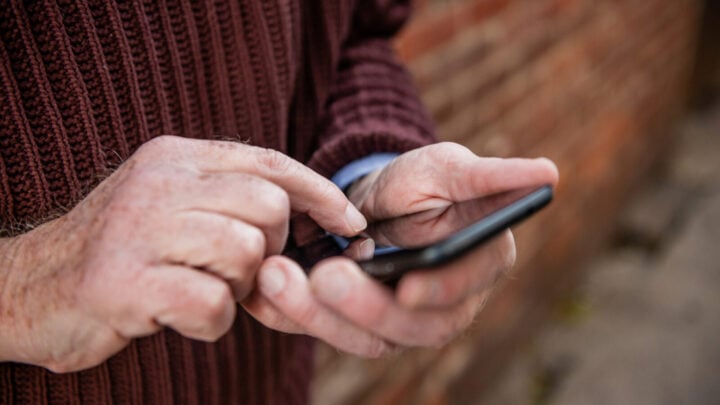 Women over the age of 55 account for over two-thirds of those have reported the scam, accounting for more than $1.4 million in losses. Source: Getty Images.

Following a significant rise in the incidence of the “Hi Mum” text scam in recent months, Australians are being reminded to be cautious when it comes to phone messages from a family member or friend claiming they need help.

Those who have fallen victim to this scam have suffered a reported total loss of $2.6 million.

The scammer sends a text message from an unknown mobile phone number to the potential victim while falsely claiming to be their son or daughter.

Once the victim is drawn into conversation and the scammer has developed a rapport with their potential victim, the scammer will ask to borrow money or have a payment made on their behalf alongside the excuse that they need it due to the unavailability of online banking on the new device.

The scammer will usually state it’s a matter of urgency before providing details for the payment and a promise to pay the money back.

We’re urging Australians to be wary of phone messages from a family member or friend claiming they need help, following a significant rise in ‘Hi Mum’ scams. More than 1,150 people fell victim to the scam, with total reported losses of $2.6 million. https://t.co/pIeJKLDTVA pic.twitter.com/f7U0iTBK2s

Australian Competition and Consumer Commission, Deputy Chair Delia Rickard said the organisation had “seen an explosion in the number of ‘Hi Mum’ scams in the past couple of months” and were “warning Australians to be very wary of messages from unknown numbers claiming to be from their children, parents, relatives or friends”.

“Scammers will stop at nothing to get your personal details or money and this particular scam is designed to pull your heartstrings. It’s important to stop and think if you get a message, especially on WhatsApp, because chances are it’s not your family member or friend – it’s a scammer,” Rickard said.

Women over the age of 55 account for over two-thirds of those have reported the scam, accounting for more than $1.4 million in losses.

“Unfortunately, these unscrupulous scammers are targeting women and older Australians, with 82 per cent of family impersonation scams reported by people over the age of 55, accounting for 95 per cent of all reported losses,” Rickard said.

“If you have reason to believe you have been scammed, contact your bank as soon as possible as they may be able to find where the money went, block scam accounts and help others to avoid sending money to scammers.”

The Australian Cyber Security Centre is also aware of the significant increase in the amount of cash and personal identity documents fraudulently obtained by the ‘Hi Mum’ scam since May, with the majority of victims aged 65 and over.

While alerting the public to the scam earlier this month, Cybercrime Squad Commander, Detective Superintendent Matthew Craft said “many parents are falling victim because they’re simply nice people who are concerned for their child’s welfare.”

“We encourage people to look out for suspicious behaviours demonstrated by these scammers; including their failure to personalise any communication and excuses as to why they can’t speak on the phone,” Craft said.

“If you receive a suspicious message on your mobile, particularly through social media or encrypted messaging, reach out to your relative by an alternative method of communication or call to confirm it is in fact them.”

The ACCC is also urging people who receive suspicious messages from a number they don’t recognise, to take steps to confirm the contact.

“If you’re contacted by someone claiming to be your son, daughter, relative or friend, start by calling them on the number already stored in your phone to confirm if it’s no longer in use. If they pick up – you know it’s a scam,” Rickard said.

“If unable to make contact, you should try a secondary contact method to verify who you’re speaking to. If you still can’t contact your family member or friend, consider asking a personal question a scammer couldn’t know the answer to, so you know the person you are speaking to is who they say they are.”

Those who believe they have fallen victim to a scam are encouraged to contact their bank or financial institution as soon as possible and report the matter to police.