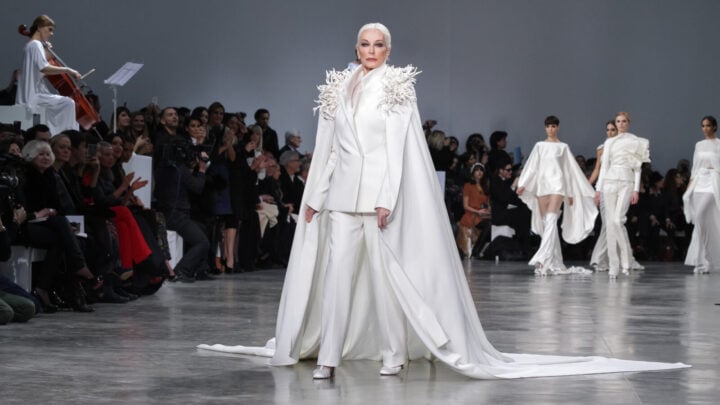 Carmen Dell’Orefice, the oldest working supermodel, has stunned people with a jaw-dropping display of her youthful beauty in a nude photoshoot released by New You magazine.

The 91-year-old lounged on a bed for the shoot, using the bed sheets to cover her nudity.

Dell’Orefice has over 70 years of experience in the field and was one of the youngest models to appear on the cover of Vogue at just 15 years old in 1947, only to be surpassed by Brooke Shields who posed for the cover in 1980 at 14 years old.

When asked what it’s like to pose nude at her age, Dell’Orefice said it’s easy when done in collaboration with professionals.

“Just like working with acclaimed photographer Fadil [Berisha], it’s their perception of what they see in you or me. We are there, a synergy starts to happen, and they bring it out,” the supermodel said.

“It’s where their mindset is. The photographer’s mindset is high, not in the gutter. It’s all projection. We’re all silent actresses, and that’s what it’s about.”

The supermodel also posed alongside another legendary supermodel, 69-year-old Beverly Johnson, the first black model to grace the cover of Vogue in 1974.

When asked for her secret to maintaining her youthful visage, Johnson said it was all about loving yourself.

“Men and women should care for themselves and love themselves. One of the secrets to maintaining beauty is doing what you do for a baby, nurturing and feeding the baby with love,” Johnson said.

“That’s what we should do with ourselves: nurture ourselves, love ourselves, and give that kind of energy to ourselves.”

The magazine said the supermodels’ shoot is proof that “age is just a number”.

“The longevity of world-renowned supermodels Carmen Dell’Orefice And Beverly Johnson is awe-inspiring and a testament to the statement, ‘It gets greater later.’,” New You magazine wrote on Instagram.

“From being one of the youngest Vogue cover models at the age of 15 to still shutting down runways at 91, Carmen Dell’Orefice has one of the most long-lasting modeling careers.

“And nearly 50 years after making history as the first African American model to appear on the cover of Vogue, Beverly Johnson is still effortlessly making waves both inside and outside the modeling world with numerous projects, business ventures, and gracing magazine covers.

“These two iconic women who have broken barriers and continue to do so opened up to New You about inner and outer beauty rituals, maintaining a youthful spirit throughout the years, living in a digital era, and how social media has transformed the beauty and fashion landscape, plus more.”