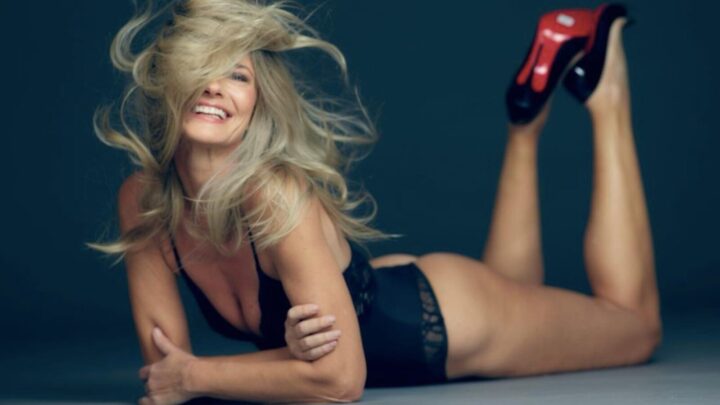 Model Paulina Porizkova addressed an insensitive comment about her age and body in her bikini photos. Source: Instagram @ paulinaporizkov

Supermodel Paulina Porizkova isn’t taking any negative comments on her age or looks, as the 57-year-old once again fights back against ageist social media trolls who have publicly shamed and criticised her for sharing images of herself in a bikini.

While the Czech-born Porizkova, who regularly exposes the double standards women face as they age, has received a plethora of adoring comments for her commitment to aging naturally, she is no stranger to backlash and hate messages.

However, the supermodel has become a pro at torching off internet bullies who like to frolic in her comment section instead of minding their own business.

In one bold move, the mother of two posted a screenshot of a nasty comment which accused the model of “falling from grace”.

“I’ve always thought that getting old and ugly is hardest on the pretty people. The fall from grace is so much farther when you were beautiful,” they wrote.

But the former face of Estee Lauder responded with measured grace.

“Here’s a good follower comment- echoing a few others,” she wrote in a caption.

“A woman of 57 is ‘too old’ to pose in a bikini – no matter what she looks like. Because ‘Old’ is ‘Ugly’. I get comments like these every time I post a photo of my body. This is the ageist shaming that sets my teeth on edge. Older men are distinguished, older women are ugly.”

Almost immediate, Porizkova’s followers jumped to her defence and expressed their support.

“You look amazing and your words are wise and insightful,” one wrote, while another added, “Ummm if I look like you at 57 I’m going to the grocery store in a bikini.”

“We all need reeducation, relearning about beauty and unlearn what was learned from media portrayal, standards set based on youth and of course from social media too,” another said.

Porizkova continues to live by her words, just last month she shared a nude photo of herself with her caption: “I’m a 57 year old woman, starting my life over. I compare myself to other women my age all the time. When I fit in- but somehow feel like I also stand out in a positive way, I feel good about myself.”

“When I fail, I feel ashamed,” she wrote.

The supermodel also brought attention to her torso, saying “notice the crepeyness of my lower belly, which is what happens when you’ve borne two kids, are thin and 57, regardless of how good your abs are.”

“I’ve decided to think of it as kinda sexy- like rumpled silk sheets instead of a smoothly made bed. It has a history of making love,” Porizkova said.

Despite the backlash and bullying, Porizkova still shares stunning photos of her body today, hoping her posts and statements make a difference in body positivity.

Do you think there's an age where sexiness starts to wane? Or should you embrace your body at every life stage?