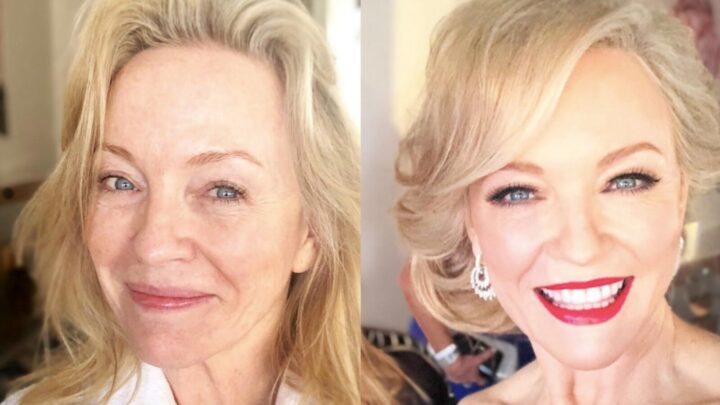 Packed to the Rafters star Rebecca Gibney gets refreshingly honest about some of her more glamorous photos, reminding fans that behind her stunning pictures and red carpet looks is a regular person.

The 57-year-old star took to Instagram on Tuesday, November 29, to share a series of photos taken from magazine shoots and red-carpet premieres next to raw selfies and goofy behind-the-scene pictures to show “fantasy v reality”.

“Fantasy V Reality. Don’t buy into the hype. We’re all the same underneath – we just have different costumes on…” the Gold Logie winner captioned the carousel.

Fans of the actress were quick to flock to her comment section to praise the star for being “real” and “grounded”.

“You look amazing no matter what! I commend you for this because a lot of artists here in the US would NEVER posts photos of themselves without makeup. In my opinion it doesn’t matter what you look like it’s what you have I your heart and how you treat others that counts,” one user wrote.

“I love how true and honest you are. I wish the younger generation of actors would be the same, the role model they project to young women is frightening,” said another.

“Love this so much! The face behind the make-up is so much more beautiful because it is real!! How important is it to show the next generation of women that who you are is the most beautiful thing you have,” wrote a third.

“All photos equally beautiful. Thanks for keeping it real. You are all class Rebecca,” another shared.

Since turning 50, the actress has been totally candid about ageing and embracing the change that comes as you get older.

In 2016, Gibney spoke to Prevention magazine about the challenges she faced with ageing and shared advice for women who felt “invisible” after 50.

“Ageing isn’t for sissies… I’ve got aching bits I never had before,” Gibney, then 51, told the magazine.

“And I can’t lose the weight as quickly because I’m going into menopause, but I’m starting to embrace that.”

Gibney goes on to say that getting older and being relevant aren’t directly correlated, arguing that “for a long time women felt like they were becoming invisible over a certain age” and that mature women are “vital and intelligent” that they “have more to offer now” than when they were in their 20s and 30s.

“We’ve got life experience and wisdom,” she says.

The year prior, Gibney told the Daily Mail that she would never dodge conversations on ageing, saying she would always share her age.

“I’m aware that I’m ageing and that’s OK,” she said at the time.