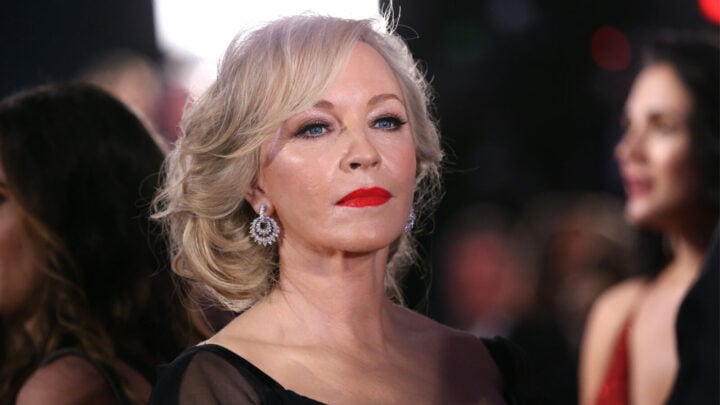 Rebecca Gibney reveals her crippling health battle, spurred on from her divorce in 1995. Source: Getty

Actress Rebecca Gibney has opened up on the crippling health battle she faced during her rise to fame, revealing she believed she wasn’t “going to make it”.

The Kiwi-born star is known for being open about the battles she’s come up against in her life, such as being raised with an abusive father, in the hopes to help others going through similar events.

Appearing on Channel 7’s This Is Your Life, the 57-year-old admitted she’d struggled with constant panic and anxiety attacks, kickstarted by her divorce from musician Irwin Thomas in 1995.

Rebecca speaks candidly about her struggle with anxiety and how important it is to keep the conversation about mental health going.

This Is Your Life: Rebecca Gibney on Channel 7 and @7plus pic.twitter.com/9cVkC75Vrh

“It was pretty tough,” the Packed to the Rafters said.

“And that was the hard thing, you do put on a front. My career was going great guns.

“I just couldn’t verbalise there was a hole inside of me and I was tumbling into it. I had anxiety attack after anxiety attack. I was in such a hole, and I thought I’m not going to make it.

The New Zealand actress said her mental health got so bad she would suffer 15 panic attacks a day, saying she once needed five Valium tablets to “survive”.

“It’s so important that now, people talk about their struggles. Because if you get the help, you can get through it,” she said.

“Now I know that if I start to slide into that pit, I know that there’s a way out of it.”

Gibney has been forthcoming with her struggles with depression, and in 2017, revealed her mental health battle came to a peak in her 30s.

“I had a nervous breakdown and emotional collapse in my early 30s so I just let it build up and build up,” Yahoo! Lifestyle reported the Halifax f.p star said.

“I used to just run away or hide them instead of facing the cause of the panic attacks, and it was ultimately a self-loathing that I developed from quite a young age.

“I didn’t love myself, in fact, I hated myself, I was crumbling on the inside.”

Gibney said she believed people need to accept themselves to help overcome depression and anxiety.

“I think there’s an immense amount of pressure on people, that they are growing up with these unrealistic expectations, and my advice to anyone is to love yourself first before anybody else, learn to love and accept who you are and cherish and really celebrate that,” she said.