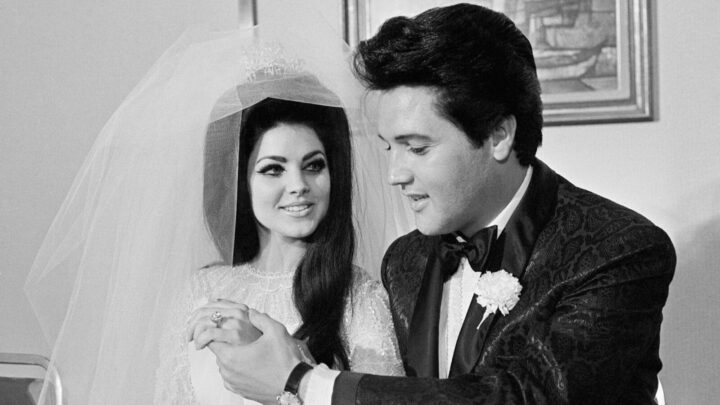 The regional Victorian city of Bendigo played host to an unusual visitor this week as Priscilla Presley made a special trip to the historic city to mark the opening of s Elvis: Direct from Graceland, the largest collection of Elvis artefacts ever to be displayed in Australia.

Surrounded by the hundreds of personal items and costumes currently on display at Bendigo Art Gallery, only a select few stopped the King of Rock’s former wife in her tracks during the pre-opening private tour of the exhibit, triggering a flood of emotions and treasured memories.

“Obviously the jumpsuits, because I was there for a lot of those appearances in Las Vegas and I do remember them and it’s very touching, it brings back so many memories,” Priscilla revealed during her interview with The Morning Show.

There was one suit, in particular, that Priscilla treasures more than the rest. The crispt white suit he wore to his first performance after a decade long hiatus. This would also mark the first time Priscilla had seen Elvis perform live.

“I became a fan,” she says. “I could not believe what I was seeing and it was like, ‘Oh my god’. This is what I loved about him … it just was a beautiful sight – how he performed, how he moved, how comfortable he felt,” she said.

But the suits weren’t the only items that flood Priscilla with emotion, there’s a set of bongos-the first ever Christmas present she gave Elvis- her wedding dress and a curated selection of his books.

One book, in particular, The Prophet by Khalil Gibran she holds close to her heart. It was the book Elvis had read so often during their late-night bedroom reading sessions together, even buying her a copy too with notes he had written for his former wife inside it.

Speaking to The Sydney Morning Herald, Priscilla admitted that it was both a sentimental and “very difficult” experience to see Elvis’ life displayed in such an extensive exhibition.

“Do I get emotional, yeah, I do,” she says. “He was a truly very special person,” sharing how it was her former husband’s biggest feat to be forgotten past his lifetime.

But with fans from all over the country racing to Bendigo to bask in the glory of Elvis’ legacy, Priscilla shared how Elvis would have been honoured to have his Australian fans enjoy his exhibition.

“I got a little teary-eyed actually,” says Priscilla.

“Because this is what I think he wanted. To be shared, to be remembered. It’s a dream come true.

“It’s been such a pleasure to be here and to be able to fulfil a dream of his, another dream of his and keeping his legacy alive.”

Arguably, there is no celebrity who has had quite the same impact on popular culture as Elvis, and thanks to Elvis the Baz Luhrmann biopic, his legend and fashion legacy has now exploded on the big screen.

Elvis: Direct from Graceland is at Bendigo Art Gallery from Mach 19 to July 22.

Are you a fan of Elvis? What's your favourite Elvis song?