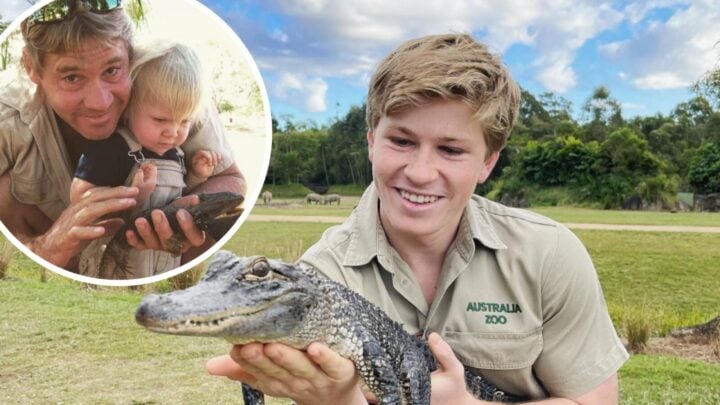 Robert Irwin’s father, beloved crocodile hunter Steve Irwin, may have passed away 16 years ago but that didn’t stop him from giving his son a heartwarming birthday message on his 19th birthday.

Robert was just two when his father tragically passed away in 2006 at the age of 44 after being stung by a stingray.

Now, to mark his only son’s birthday, Steve’s wife Terri Irwin has surprised Robert with a touching video of Steve discussing Robert’s birth and his hopes for his son to become the next crocodile hunter.

In the footage, Steve can be heard saying: “I’m in the hospital and Terri’s pushing and pushing and it’s hard.”

“And anyway, bang, pop him out, and I’ve lifted him up and you know he’s a little bloke, and put him on Terri’s chest and we’re just stoked.

“And at that moment, at that very moment, I saw the light. The whole time you’re here you know I’m catching crocs saving wildlife, doing this, doing that.

“So I need these blokes to like come up as quick as they can, so this little bloke’s gonna have to catch the crocs with Bindi.”

Steve then went on to talk about the importance of raising his kids to hopefully carry out his legacy, saying it would be “the proudest moment of my life.”

The birthday tribute proved to be emotional viewing for Robert, who said: “Making me cry on my birthday.”

“It means the absolute world,” he continued. “I just think it’s such a privilege, personally and as a family, to continue the legacy of dad.

“He gave his life, quite literally, for wildlife conservation and to make the world a better place.

“I just hope he’d be proud and I hope I can find my own way and continue a legacy that is so profound.”

Despite largely growing up without a father, Robert is a chip off the old block and has worked effortlessly to keep his father’s legacy alive.

Recently, the young wildlife warrior launched his first-ever photography book, a project which he says was inspired by his father’s own passion for capturing nature.

Appearing on Sunrise, Robert revealed that on top of crocodile wrangling, Steve was also “incredibly passionate” about photography.

“Not a lot of people knew this…my dad was an incredibly passionate photographer,” he tells hosts, David Koch and Natalie Barr.

“My dad had an amazing eye behind the lens, and not only was he there in front of the camera pushing that conservation message, but he was often behind the camera getting those shots, getting really close.”

Robert then went on to share the discovery that ignited his interest towards wildlife photography.

“I was actually cleaning out his own office, looking through some of the archives and found his own camera gear and I was stunned,” he recalled.

“I came to mum and said, ‘What’s all this amazing, professional photography equipment doing here?’. And mum [says], ‘That’s all your dad’s!’. He was the real deal, he had all the lenses, all the cameras.

“It’s a really special thing, and it meant a lot to me.”