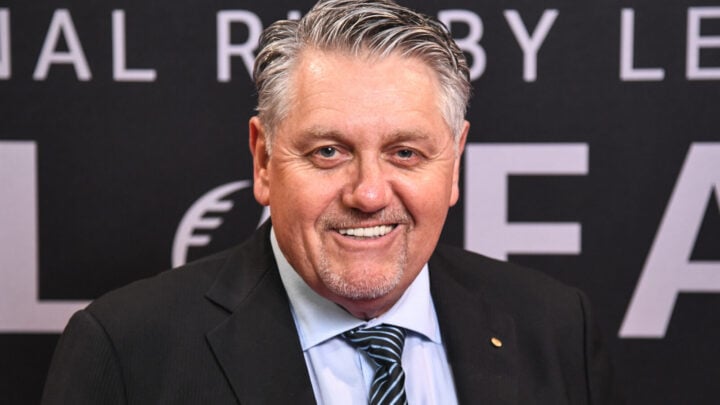 Ray Hadley, who recently tied the knot for the third time, shocked fans earlier this week after he shared a before and after weight loss shot on his official Facebook page, and some fans reckon he looks at least 20 years younger!

Taking to the social media platform on Tuesday, the radio host, 66, revealed he’s lost an impressive 18 kilograms over the past year.

The before and after pictures show a drastic difference with Hadley’s face and stomach looking much slimmer in the most recent shot.

Posted by The Ray Hadley Morning Show on Tuesday, April 6, 2021

Since posting the photo, Ray has received a flurry of supportive comments from fans, who commended him on his weight loss, with one writing: “You look 20 years younger with the weight loss and loss of beard. Congratulations.”

Another added: “Amazing what the right woman can do for a man’s appearance, rough-nut to svelte good sort.” While a third wrote: “Wow, well done Ray and how much younger do you look too. Sophie is very lucky.”

Ray’s weight loss transformation could have been motivated by his recent nuptials. Ray married his third wife Sophie Baird in an intimate ceremony in New South Wales on Saturday, March 27.

Sophie was Ray’s personal assistant for 16 years, before they became engaged in 2019. The couple tied the knot before family and friends, with the bride wearing a white off-the-shoulder gown. She walked down the aisle to a song from the couple’s favourite movie Notting Hill — ‘When You Say Nothing At all’ but chose the original version by Keith Whitley, rather than the Ronan Keating cover that appeared in the film. Ray and Sophie originally planned for a June 2020 wedding, but those plans were postponed due to Covid-19.

And it comes just a week after the radio jockey revealed to The Daily Telegraph the bizarre, and unique wedding gift he gave to Sophie. Instead of opting for jewellery or a love letter of some sort, Ray gave his new wife a racehorse. The gift was in-keeping with the theme of the couple’s wedding at Saddles restaurant, in Mount White, which is owned by well-known Australian horse breeder John Singleton.

Ray described the wedding as “magnificent” and said Sophie “took his breath away” as she walked down the aisle towards him.

Do you have a weight loss story like this?