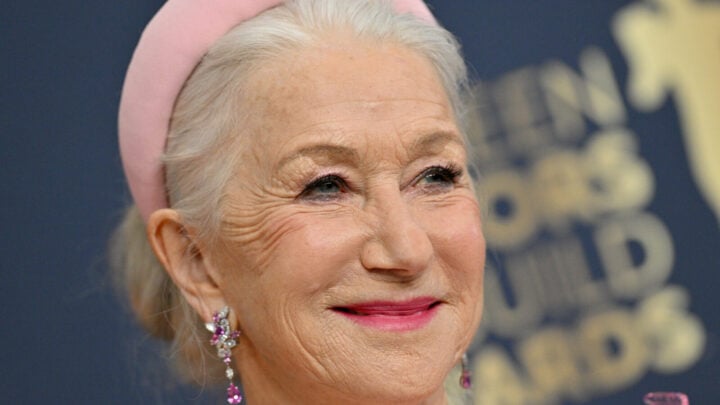 The actress donned a stunningly classic pink gown, tailored flatteringly in at the waist and embellished with delicate metallic flowers placed on her left shoulder and the right side of her waist. Mirren accessorised the understated outfit with a matching pink headband, sparkling drop earrings, a pink clutch and mask, and of course, an eye-catching pink lipstick.

The seemingly ageless actress was captured in various poses, smiling and waving to fans and cameraman as she blew kisses and dazzled audiences.

Last year, Mirren was chosen to receive the next Screen Actors Guild (SAG) Life Achievement Award at 2022’s SAG Award ceremony – an award deemed by the Screen Actors Guild – American Federation of Television and Radio Artists, as their most esteemed honour.

In her acceptance speech at the SAG awards, Mirren was the ever-charming portrayal of modesty infused with some rather hilarious comedic undertones.

“Lifetime achievement. Lifetime…Achievement. Sounds so grand. I suppose I, you know, I’m still alive, so by that measure, I’m eligible,” she joked, humble as always.

“But honestly, any achievement that I’ve succeeded in is a result of my mantra, which is basically, be on time and don’t be an ass*ole,” she said, mouthing the last word as fans broke out in laughter.

Despite being selected for the award, Mirren went on to admit that she didn’t “feel worthy” of the remarkable privilege.

“I’m simultaneously enormously proud and yet I’m driven, I’m riven, with the understanding that I absolutely do not deserve this, and there, there is the conflict that I believe you all understand. Insecurity versus ego, hmm? That cocktail that I believe most actors sip of an evening as they contemplate the wonderful gift that they receive the moment they decided to become an actor,” said Mirren.

Fans took to Twitter to congratulate and commend the actress, admiring Mirren for her incredible speech and outstanding career to date.

So lucky to have worked with her. She was always on time and never an asshole

Helen Mirren is one of the most influential actors on Earth. What a beautiful woman, and so deserving. ♥️

Such an eloquent woman, well spoken and funny. A trailblazer, risk taker. A true gem this one. ❤️

Dame Mirren. One of the ageless beauties to ever grace our screens. Brilliant actress. I’m happy for her

Upon Mirren being selected for the award, President of SAG-AFTRA, Fran Drescher, admired Mirren for her talent and ability to play such versatile acting roles throughout her career.

“Dame Helen Mirren is quite simply a brilliant and luminous talent,” Drescher said.

“She has set the bar very high for all actors and, in role after role, she exceeds even her own extraordinary performances.”

The award will mark Mirren as the 57th recipient of the ‘Life’ honour which has been granted to worthy recipients since 1962.

How stunning is the talented actress?