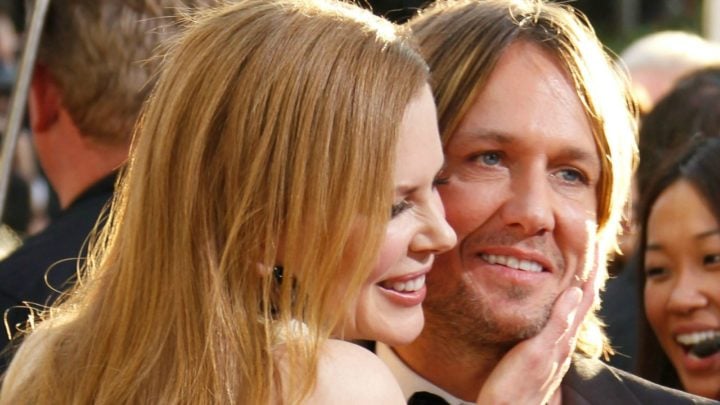 Nicole Kidman and Keith Urban tied the knot in Sydney in 2006. Source: Getty.

Keith Urban never shies away from declaring his love for wife Nicole Kidman, and the country music star did just that on Thursday as he penned a sweet tribute to the actress in honour of their 14th wedding anniversary.

Keith, 52, posted a gorgeous photo of the couple holding hands while jumping in the air on a beach. “Happy Anniversary Baby!!!!!” he captioned the post. “14 years… and I feel like your boyfriend in ALL the right ways!!!!”

Happy Anniversary Baby!!!!! 14 years…. and i feel like your boyfriend in ALL the right ways!!!!

Nicole, 53, also marked the occasion by sharing an adorable photo of the pair embracing. The Moulin Rouge! star simply captioned the post “Us”, along with a love heart emoji.

The post comes just days after proud husband Keith took to social media to wish his wife a happy birthday. He wrote: “WHAT A GIFT JANELLE AND ANTONY KIDMAN BROUGHT INTO THE WORLD ON THIS DAY !!! Happy Birthday Babygirl.” While Nicole’s close friend and Big Little Lies co star Reese Witherspoon commented on Keith’s post and said: “Happy Birthday Nic!!”

Keith also shared an image of his wife peering out from behind an array of colourful balloons, as the couple remains in lockdown with their two daughters at home in Nashville, Tennessee.

Keith and Nicole are one of Hollywood’s most loved-up couples, regularly sharing their love for one another in interviews, on stage or via social media. Just a few months ago, Nicole opened up about her romance with her husband of 14-years in an interview with Wall Street Journal magazine, confessing that she knew early on in their courtship that he was ‘the one’.

The defining moment came after the crooner took Nicole for a ride on his Harley-Davidson to Woodstock, NY, and then treated her to a romantic picnic in the woods. “I was a goner – I mean, c’mon,” she told WSJ.

Are you a fan of Nicole Kidman and Keith Urban? Do you have a message for the couple on their anniversary?