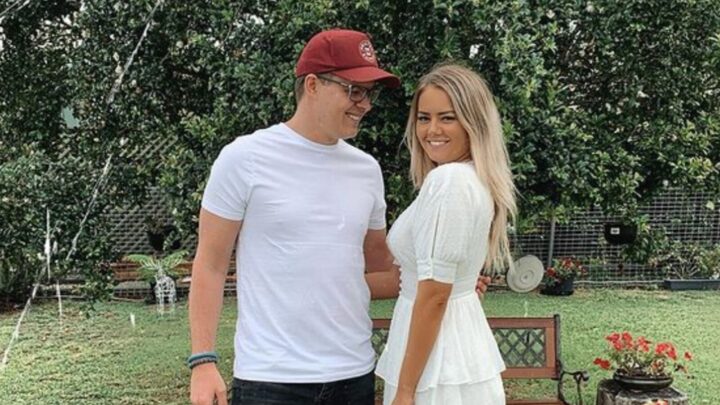 Television sweetheart Johnny Ruffo has got fans feeling giddy after sharing that he and long-time girlfriend Tahnee Sims may soon be tying the knot.

Speaking to Yahoo Australia, the 34-year-old entertainer revealed that his girlfriend of seven years has been giving him the “nudge” to get down on one knee and propose.

“She’s definitely given me the hint about, you know, getting engaged,” he told the outlet.

“So I think that might be on the cards maybe. I’m definitely getting the nudge nudge.”

But marriage isn’t the only thing on the couple’s mind, as Ruffo has already frozen his sperm in the hopes of having children in the future.

Ruffo opened up about the decision in his new memoir No Finish Line, saying he thought it was a necessary step to take in case he became infertile while undergoing treatment for his brain cancer.

According to Ruffo, before being diagnosed with brain cancer, his primary focus was his singing career and his long-time girlfriend Tahnee Sims.

“There’s something about nearly dying that puts things in perspective for you… Up until that point, the only real things that had mattered in my life, in no particular order, were performing, recording music, acting, Tahnee, family and partying with friends,” he explained.

While Ruffo’s perspective on life may have shifted, one thing is for sure, Sims has been solely focused on Ruffo since day dot.

Following Ruffo’s first brain cancer diagnosis in 2017, Sims has been a constant “foundation” of support for her partner. Caring for him throughout the entirety of their relationship.

“Tahnee helps me every single day to get through it. She’s like a motivational speaker now. ‘We just need to get through this week. And then, you know, next week it’ll be a little bit better’,” Ruffo revealed in an interview with Now To Love.

“Tahnee’s always there motivating me to get outside and get some sun, go for a walk, and do different little things. She’s constantly there by my side trying to motivate me to feel better and to just keep going. One foot in front of the other.”

The actor calls his girlfriend his “guardian angel,” saying it was Sims’ constant insistence that he gets a  check-up for his reoccurring migraines that saved his life.

Ruffo had previously admitted that his second round of cancer treatment is “not easy” and that Sims has “been the most incredible support”, saying that he feels “like she’s going through” the fight “just as much” as he is.

“We’ve been through so much together now. The longer we stay together, the stronger the bond,” he said.

Despite outliving his original three-year life expectancy and coming to terms with his recent terminal diagnosis, Ruffo recently told The Project that he worries about what will happen to Sims when he inevitably dies.

“What plays in my head a lot is, I hate to say this, how hard it may be for her if something does happen to me,'” Ruffo shared.

“You can only imagine how difficult it’s been for her.”

“It’s something that I don’t want to think about,” Ruffo admitted, “It just gets me a little bit emotional about it because I know at some point something will happen, whether it’s, you know, a month from now or 10 years from now or 20 years.”