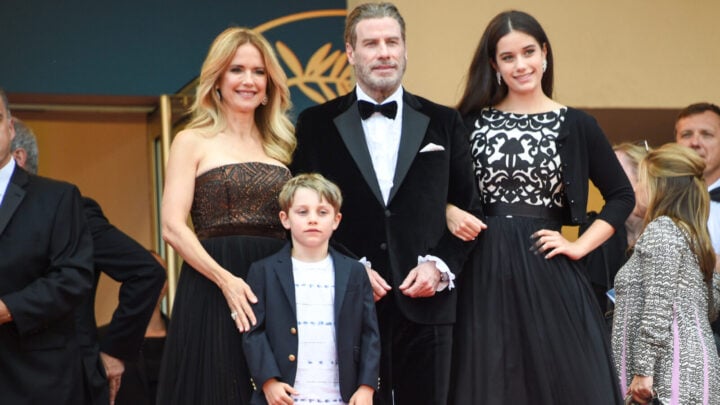 John Travolta and Kelly Preston with their children Ella and Benjamin in May 2018. Source: Getty

Hollywood star John Travolta has opened up about the difficult conversation he had to have with his 10-year-old son Ben, after his wife Kelly Preston passed away from breast cancer in July last year at the age of 57. The 67-year-old actor revealed the details of the emotional talk in a new episode of comedian Kevin Hart’s series Hart to Heart on Friday.

The two stars touched on several personal topics, including the fact that after Preston died, his son told him that he was afraid that he would also die. Travolta recalled how he then tried to explain some facts of life to his son.

“I said, ‘Ben, you always love the truth and I’m going to tell you the truth about life. Nobody knows when they’re going to go, when they’re gonna stay. Your brother [Jett Travolta] left at 16 [in 2009], too young. Your mother left at 57, that was too young, but who’s to say? I could die tomorrow. You could. Anybody can. It’s part of life. You don’t know exactly. You just do your best at trying to live the longest you can.'”

Travolta said his son also asked him what it was like to be in his 60s. “My son has always wanted truth, and he’s only accepting [of the] truth, so I said, ‘You know what, Ben? I can’t believe it. I can’t believe I’m in the last chapter of my life. I can’t believe it,’” Travolta recalled to Hart. “‘I’m like, eternally 21. I don’t understand being in my 60s!’”

Ben then asked his dad if he was able to remember what it was like three decades ago. When Travolta said that he did, his son replied, “Just 30 years ago seemed like a long time. Don’t you think you have 30 more years in your life to live?”

Travolta said the conversation changed his outlook on life. He told Hart, “I realised that it’s about viewpoint in life that allows you to settle down about something. There ain’t nothing wrong with 30 years. But yet, before he said that, I was thinking that, ‘Oh this is my last [chapter]? How sad.’”

When reflecting on what he wants to happen in the next three decades, Travolta explained that he’s looking forward to helping his two children shine. His daughter, Ella, is already following in her father’s footsteps as an actor and singer, and Ben is preparing to follow suit. “I want to leave this world with them doing great, and they already are,” Travolta said. “That’s my main thing, is to pay it forward to them.”

The actor marked the family’s first Christmas without Preston last December and, more recently, Travolta shared a tribute to Preston on Mother’s Day in May, penning a short letter to his late wife. “Dearest Kelly,” he wrote alongside a family photo. “You brought into my life three of the most wonderful children I have ever known. Thank you. We love and miss you. Happy Mother’s Day.”

Do you have a message for John Travolta and his family?