‘It all just works’: Lisa Wilkinson opens up on marriage in sweet anniversary post 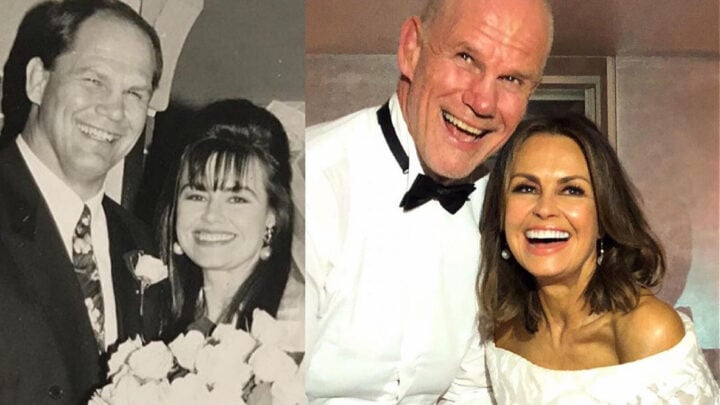 Lisa Wilkinson has shed light on her 28 years together with husband Peter FitzSimons in a sweet anniversary post. Source: Instagram/ Lisa Wilkinson

Every relationship has its ups and downs, good times and bad times – and that’s exactly what Lisa Wilkinson wanted to share as she reminisced on the 28 years together with her beloved husband on their anniversary.

The television presenter – who married partner Peter Fitzsimmons in 1992, took a look back at what they’ve gone through as a couple in a sweet post on social media this week and how although many said they wouldn’t last, here they are all those years later in a happy and healthy marriage.

Sharing a photo of them from their wedding day 28 years ago, and another from three years ago when they renewed their vows, the 60-year-old said somehow “it all just works” and they now understand what it truly means to be married.

“When Pete and I met way back at Xmas in 1991, there were many – including my sweet, protective mum – who said we wouldn’t last,” she wrote on the Instagram post. “Those voices only got louder when we walked down the aisle a ridiculously short nine months later on the 26th of September 1992 (yes, that’s a very young us on the left).

“Well, here we are, an old married couple, three beautiful kids and exactly 28 years later, still muddling through, still holding hands, still the first ones we want to confide in, still making each other laugh, still pushing each other, still talking, questioning, encouraging, supporting, trusting forgiving, challenging (and yes, arguing), and still defying those who thought we wouldn’t make it (and to be honest, there were more than a few days when neither did we)! Somehow though, it all just works.”

She continued: “But it does also take a supportive village of wonderful friends and family to get you through the ups and downs… and three years ago we invited them all to dinner on our 25th anniversary to say thank you… and surprise them by renewing our vows (that’s the pic on the right).

“This time, it was with our eyes wide open to what being married to each other really means. It ain’t perfect, but we wouldn’t have it any other way. So here’s to our beautiful supportive village. And our imperfect union. Happy anniversary sweetheart.”

The post was bombarded with comments from Lisa’s followers who wished her well and thanked her for being so open and honest when it comes to the troubles and successes people face in their relationships over the years.

“I love this. You can see the energy you give each other, the love you have is brighter in the next photo and I’m sure it only gets stronger,” @jjjennyandthebets commented on the post. “I love the honesty you give as someone who’s celebrating their first wedding anniversary soon!”

Are you married? How long have you been together?