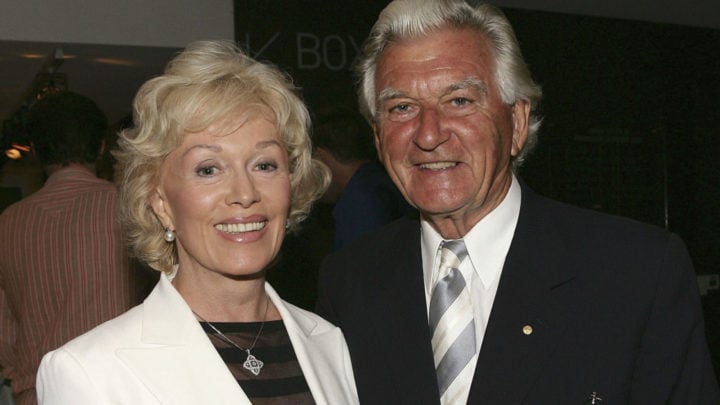 Former Prime Minister Bob Hawke passed away on May 16 this year. Source: Getty.

It has been six months since her husband, former Prime Minister Bob Hawke, passed away at the age of 89 and now Blanche d’Alpuget has opened up about the affair that brought the couple together and why she has no feelings of regret over the relationship.

Blanche met Bob, who was married to first wife Hazel Hawke at the time, at a party in Jakarta in the 1970s. While it would be another 20 years or so before they tied the knot, speaking to Lisa Wilkinson, the 75-year-old author admitted there was an “instantaneous attraction” between her and Hawke.

“I had no idea who he was, I thought his name was Robin. He just sat down and we talked a lot,” she said, during an interview aired on Sunday night’s episode of The Project.

She added: “Bob was not a faithful husband, I didn’t feel I was doing anything bad.”

Blanche also revealed that she is starting to come to terms with her husband’s death, telling Lisa: “In the last week I’ve come good, up until then I was pretty much a wreck. People coming up in supermarkets … I’d be trying to buy cauliflower and somebody would come up and say ‘Just wanted to say’ and I’d cry on the cauliflower.”

Hawke passed away earlier this year on May 16 – just two days before the general election – at his home in Sydney. Blanche confirmed his death in a statement to media, which read: “Today we lost Bob Hawke, a great Australian – many would say the greatest Australian of the post-war era.

Following his death, she revealed she had made the decision to downsize and sell off many of the former PM’s prized possessions at an auction. Trinkets and iconic mementoes, such as his office chair and a silver bowl given to Hawke by former US secretary of state Dick Cheney, went under the hammer in August.

Speaking just seven weeks after Bob’s death, Blanche said: “I’m downsizing dramatically. The house is very big and there’s a great deal of work to do because I’ve got to auction virtually everything because it won’t fit in the apartment I’m moving to.”

Did you watch Blanche's interview on The Project last night?