AstraZeneca: Second vaccine approved for use in Australia 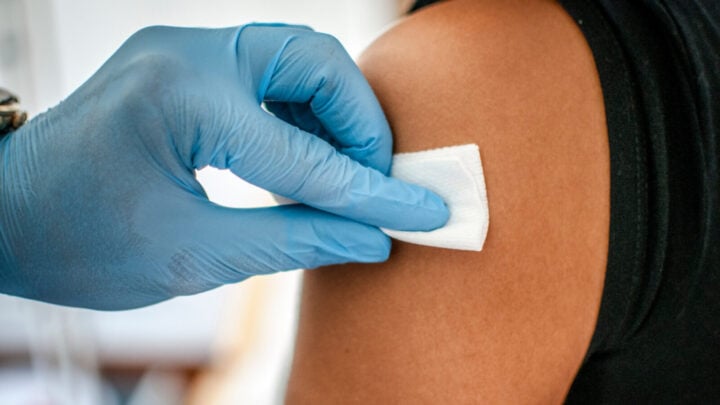 The TGA announced the news in a statement this morning. Source: Getty.

Despite copping some heavy criticism in recent weeks over its effectiveness, the Oxford-AstraZeneca Covid-19 vaccine has been given the tick of approval from the nation’s medical regulator, the Therapeutic Goods Administration (TGA).

The TGA “has granted provisional approval to AstraZeneca Pty Ltd for its Covid-19 vaccine, making it the second Covid-19 vaccine to receive regulatory approval in Australia,” the TGA said in a statement Tuesday morning.

The vaccine has been approved for people aged over 18 and will be administered in two doses, at least four weeks apart.

“Covid-19 Vaccine AstraZeneca is provisionally approved and included in the Australian Register of Therapeutic Goods (ARTG) for the active immunisation of individuals 18 years and older for the prevention of coronavirus disease 2019 (Covid-19),” the TGA said.

“The use of this vaccine should be in accordance with official recommendations and given in two separate doses. TGA’s regulatory approval allows the second dose to be administered from four to 12 weeks after the first. The Australian Technical Advisory Group on Immunisation has recommended that the interval between first and second dose is 12 weeks. However, if this interval is not possible, for example because of imminent travel, cancer chemotherapy or major elective surgery, a minimum interval of four weeks between doses can be used.”

While there’s been some concerns over the vaccine’s effectiveness in older people, the TGA has reassured Aussies. “Patients over 65 years of age demonstrated a strong immune response (high seroconversion rates) to the vaccine in clinical trials, however there were an insufficient number of participants infected by Covid-19 to conclusively determine the efficacy in this subgroup,” the organisation said.

“In this sub-population, efficacy has been inferred from immunogenicity data and efficacy demonstrated in the general population. Reassuringly, there were no safety concerns in this age group in the clinical studies, nor in the large numbers of elderly people who have been vaccinated to date in overseas rollouts. The decision to immunise an elderly patient should be decided on a case-by-case basis with consideration of age, co-morbidities and their environment, taking into account the benefits of vaccination and potential risks.”

Victorian chief health officer Brett Sutton was one of the first to comment shortly after the announcement, saying in a press conference, “Who wouldn’t be delighted at the prospect of another vaccine, especially one locally manufactured, that will deliver millions of doses to Australians. I can’t wait to be vaccinated when my time in the queue comes.”