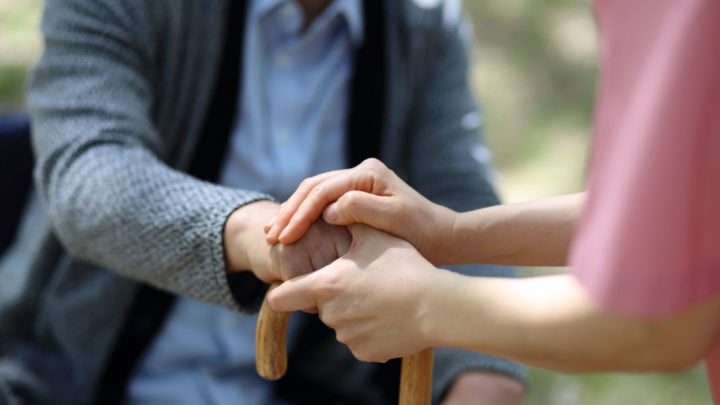 Some feel the packages fall short of the required amount. Source: Getty.

On Tuesday the Morrison government announced that an additional 10,000 home care packages would begin to rollout across the country this week, as part of a plan to help older Australians remain in their own homes for longer.

Now advocacy groups have reacted to the news, appearing to be undecided about whether the move by Aged Care Minister Ken Wyatt is sufficient or if the new packages actually fall way short of the number of elderly people in urgent need of home care.

Diedre Timms, CEO of Advocare, told Starts at 60 there are currently more than 100,000 senior Aussies on the list for these vital services, meaning the current rollout will cater for less than 10 per cent of those in need.

“I welcome the government’s announcement of an additional 10,000 packages,” she said. “But we have a situation of in excess of 100,000 people on the wait list for services.

“These are elderly frail people who may well die before they get services or be forced from their homes to residential care simply due to lack of support. Most older people want to stay at home as long as they can. Our government must do more to support frail older people.”

Timms’ views were echoed by the Council on the Ageing (COTA) who pointed out that the additional packages amount to only one third of the urgent increase of 30,000 high level home care packages that COTA called for last September in its paper Keep fixing Australia’s aged care system… taking the next steps in tandem with the Royal Commission.

COTA Australia Chief Executive, Ian Yates, said: “This a good step, a welcome step, but one that will still leave too many older Australians that the government has itself assessed as in need of high level care at home, without that care.

“We really need to reduce the waiting list so that no one waits more than three months for care. The reality is that when someone needs high-level support at home they can’t afford to wait. The risk to them and the burden on family is unacceptable, as is forcing people into residential care prematurely.”

However, Dementia Australia CEO Maree McCabe said she welcomed the news, stating that the additional packages, which will be split evenly across Level Three and Level Four, will help more Australians living with Dementia to remain at home, with their loved ones, for longer.

McCabe said: “Currently, around 70 per cent of the more than 436,000 Australians with dementia live in the community. An increase of home care packages will help more Australians to live at home for as long as possible, in a supported way. This will make a substantial difference not only to their lives, but also to those of their families and carers, as well as the broader community.”

However, she went on to say that while Dementia Australia welcome the Federal Government’s commitment and the focus they have placed on “supporting senior Australians, particularly those with Dementia”, there is still much more to be done.

The additional packages were originally announced in December last year when the Coalition released its Mid-Year Economic and Fiscal Outlook. At the time, the packages were promised “within weeks” and on Tuesday, Wyatt announced the rollout of the packages would commence this week.

Wyatt said the rollout will “help more senior Australians to remain living independently in their own homes” by providing funding for up to $50,000 of care services per person per year including nursing, home assistance, nutrition and meal preparation and transport support.

Home Care Packages are coordinated packages of care and services which are designed to help Australians live independently in their own homes for as long as possible.

There are four levels of home care packages catering different levels of care needs, ranging from basic care needs, which include every day tasks such as housework, to those with high-level care needs.

Level Three is targeted towards those with intermediate care needs and provides individuals with a sum of up to $33,000 per year. While Level Four is suitable for those with high-level care needs, for example those who may require daily visits from a care worker or a nurse, with the government paying out up to $50,250 each year to those in receipt of this package.

Do you, or a loved one, rely on home care? Do you think the government needs to do more to help senior Australians?