In Downsizing your home on Friday 3rd May, 2019 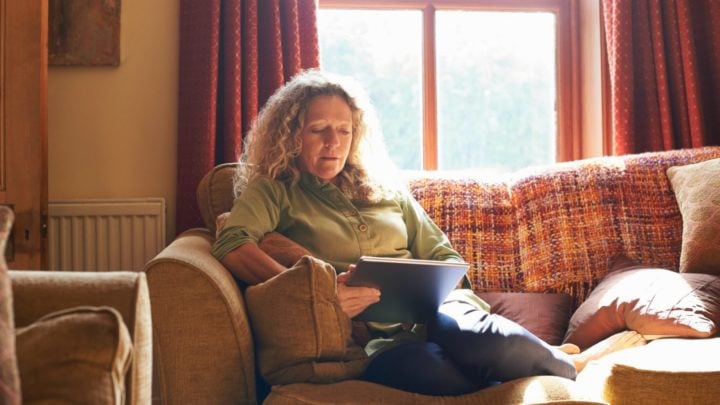 Digitising photographs so you can view them on a tablet is one way to reduce clutter, while choosing a trusted child or grandchild to care for them is another.

Whether you’re downsizing or just moving to a new house, you know that the big stuff is the easiest; as long as your overstuffed couch fits through the front door, the furniture removal is pretty much under control (grand pianos notwithstanding!).

It’s the little stuff – the books, ornaments, photographs and mementos – that are the hardest to sort through as you pack. Cramming everything into a box and deciding that you’ll sort it all out once you’re in your new abode is just storing up labour for later, when you’ll feel even less like tackling it.

But the thought of going through your bits and pieces one by one during the moving process just seems so time-consuming, not to mention painful. Who wants to throw out the kids’ school reports after having kept them for so long, let alone all of the little ‘I love you’ cards in their best eight-year-old writing, the photographs your grandmother gave you or the print you remember admiring on a gallery wall and saving up to buy?

It’s a feeling Starts at 60’s community knows only too well. For blogger Jean Prince, it’s her books and her shoes that prove her undoing during the annual clear-out her downsized villa requires.

If you’re about to move to a new home that’s considerably smaller or has less storage space, though, you may not have the luxury of hanging on to your beloved items. With that in mind, we collected the all-time favourite decluttering and recycling tips recommended by Starts at 60’s bloggers, to help ease the process.

Use the thought of your new lifestyle to spur you on

Anne Rolfe, a Starts at 60 blogger who did her downsizing last year, writes that she found it tough to part with ring-binders full of work she’d produced, only some of which she had soft copy versions of which to keep. But she steeled herself with the thought of her new life in a smaller dwelling.

“As I let them go, I reminded myself that I do even better work now and will create more,” she explains. “In the end, I don’t want to stuff my house full of things and I don’t want to spend my life looking after stuff. I want to fill both with the space to be free.”

Rethink how you use what might be considered clutter

Like many 60-pluses, blogger Lyn Fletcher has a stash of doilies and ‘Duchess sets’ given to her by her mother, but rather than relegating them to the back of linen cupboard or the Salvation Army shop as many others would, she found a practical use for hers.

“I have lots of old, wooden furniture that needs polishing,” she writes. “Rather than storing these doilies in a cupboard to collect dust, I make use of them to protect both the furniture and the precious china or other such things that I place on the surfaces.”

Blogger Barbara Penton decided to declutter after doing the same for her parents and realising she didn’t want to leave the mammoth task of sorting through beloved family memories to another person.

She recommends two methods for purposeful shedding of belongings. Firstly, choose one category at a time  – books, DVDs, videos, kitchenware, clothing or the like – then drag every item in that category into a central area, where you can lay it all out and quickly pick out the items you value and those you no longer use.

Having all of your items displayed on, say, the living room carpet as Barbara does, not only helps you compare them against each other so you can choose the ones you treasure most, but having them all in a high-traffic area of the house means you can’t be lulled into thinking ‘out of sight, out of mind’ when it comes to the decluttering task at hand!

Barbara also recommends making your most precious mementos the last category you sort through.

“Things that have the most sentimental values (photos, souvenirs, gifts) will just slow you down and undermine the whole process as you weigh up the pros and cons of keeping, donating or discarding,” she explains. “Chances are you’ll start reminiscing about that holiday in Scotland or baby pictures or images and souvenirs of friends long gone, and you’ll get nowhere fast.”

Don’t forget, of course, that digitising your photographs and other treasured images and storing them on a USB, your device or in the cloud is one way to keep them while reducing clutter. Another tried-and-trusted move is to entrust them to the child or grandchild who is interested in family history – there’s usually at least one! – with a written or verbal explanation of their importance.

Stop making excuses for your wardrobe

Fashion blogger Alarna Hope, who contributes to Starts at 60, says getting rid of unworn clothing can be hard because most of us fall into the mental traps of telling ourselves we have good reasons for hanging on to certain pieces. Do any of these sound like reasons you’ve used to keeping clothing you don’t actually wear?

None of the above are good reasons alone for keeping a piece of clothing that you never wear, she writes, so consider whether each piece is deserving of a place in your wardrobe based on its merits as an item of clothing without any additional reasons attached, and give away or sell the pieces that don’t make the cut.

Consider what clutter may be costing you

Starts at 60 contributor and life coach Michelle House points out that an excess of things can have a real cost. In cases of severe clutter, it means you may miss paying bills and thus taking advantage of early-payment discounts, but even in low-level clutter circumstances, you’re likely to be buying items you already have simply because you’ve forgotten you have them.

“How many times have you come back from the shops with a packet of batteries or sticky tape?” she writes of the habit of buying things you already have. It applies just as well to the food in the chest freezer you can no longer dig to the bottom of as is does to the mundane items we all accidentally re-purchase unnecessarily.

“While window shopping is fun, wasting time and money isn’t it. Have a list with you for things you need to buy or an app on your phone. Refrain from buying things just because they are on special or in a bargain box.”

No one says decluttering to move or downsize is easy. Sixty years or more of learning what you love to have is hard to undo, especially if you tend to be a bit of a Material Girl. But the clear mind and feeling of lightness that comes from shedding unnecessary items is a great one, whether you’re downsizing or not.

Things you should know: Westpac Banking Corporation ABN 33 007 457 14 AFSL and Australian Credit Licence 233714 (Westpac). Information is current as at April 2019. This information does not take into account your personal circumstances and is general in nature. It is intended as an overview only and it should not be considered a comprehensive statement on any matter or relied upon as such. Before acting on it, you should seek independent financial and tax advice about its appropriateness to your objectives, financial situation and needs.

What’s your best decluttering tip? Have you done a big clear-out of years’ worth of belongings? Did you feel better or worse after doing so?