‘Money used to move at a snail’s pace. Now, bills are paid with a touch of my mobile’ 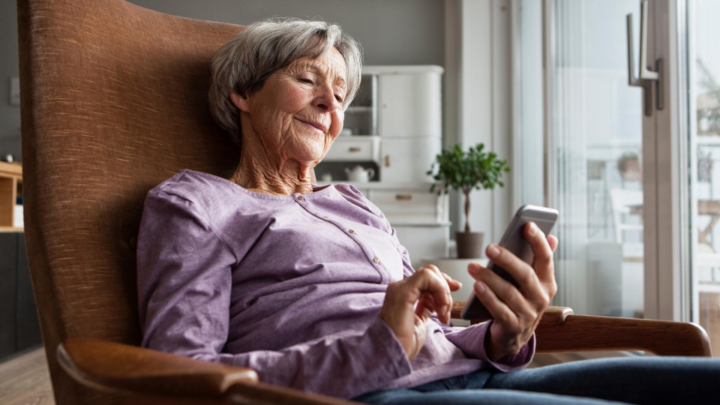 When I was a child, we did school banking. Anyone else who gave me gifts of money saw it go into my moneybox and I would take money every week to school to bank. My, how banking has changed over the years! I now do most of my banking on my mobile smartphone and occasionally on my laptop.

As I grew up and started work, I opened my own account. I would go into the bank each week and put what was left from my wages from the previous week into my account. Up until I was 50, I used a passbook account.

Then I started to take notice of the small interest amounts made on the money I banked, so I decided I needed to keep up. I needed to know what was happening with my money and how to get the best, easiest, method of banking. When it came to how I used to bank, it wasn’t always that easy – I would often have long waits inside a branch, and living a large portion of my life in country Australia meant branches weren’t readily available.

At the same time, little by little I noticed how banks were changing the way they did things too. Bills would come in the mail and on the back of the bill it would give me options to pay, and some of those options were online. I was wary, though, and asked other, younger and older people where I worked, how they banked. That was about 15 years ago, I think.

Then ATMs popped up everywhere. My work salary got paid straight into my bank account. My passbook was replaced with a shiny new card and I withdrew money from an ATM or from eftpos when I was shopping, without having to make an extra trip to the bank. How easy was that?

One day I decided to give phone banking a go and the rest is history. Phone banking was so easy and once set up, I fell into a pattern. After the first few times, when nobody hacked my account and bills were paid on time, I was hooked. My bills were now being sent online and I was paying them with just a phone call. Fabulous.

At work one day, a discussion revolved around the new technology of ‘internet banking’. A few older work colleagues were dead against it. I listened for a while and the best reason I could fathom they had for not trying it was because ‘control of our finances would no longer be in our hands’ and ‘the internet was not secure enough to stop others from hijacking our money’.

In a time when modern-day technology moves so fast and we hear so much about hackers and the potential risks of using the internet, one could be forgiven for seeking reassurance and a better understanding of how to use digital banking safely. But though there’s a lot of information out there now on how we can protect ourselves from scams and frauds – and our smartphones have more security features on them than our wallet ever did!

But the more I thought about digital banking, the more intrigued I became, so one day I took myself into the local bank to make enquiries. Just the very long queue I had to wait in to talk to a teller was nearly enough to convince me. After it was all explained to me, I decided to give it a go.

I love technology and how far it can take you – just in your living room. My children had internet nearly as soon as we could access it. They were young so I learned about the internet to teach them. When they caught up and thought they knew more than me, I found they were impatient. Rather than teach me, they’d do things for me, so I started teaching myself. It’s not as hard as you might think.

At first, I made a couple of mistakes when internet banking, but who doesn’t make mistakes the first time they try something new? But as with most things, mistakes can be corrected – like the time I was paying a bill and thought it had not gone through, so I paid it twice. I found, back then, it took much longer to get your money back than it did to pay it! That is no longer the case. I must admit that when I started, I worried about hackers watching me and I did forget my PIN on numerous occasions. I’m sure some of you are nodding and smiling!

If you’re a Baby Boomer, you would not have been impressed if you had to pay to use a ‘foreign’ ATM either.

But anything I need to know these days, the bank is happy to explain to me and there are so many more guides and videos online if I want to learn more. Today I live alone and I am closer to 70 than 60 but I’m an ‘expert’ on digital banking. My children all use digital banking and sometimes ask my help with aspects of it! I use my laptop occasionally to do my banking, but only having pre-paid internet in the house, I started using my mobile phone, which is very simple. You don’t need an expensive mobile, any smartphone will do.

My bank, as do most banks now, I think, has its own banking app. Once my friendly in-branch teller explained the app to me, I was quick to download it and, wow, mobile banking is fabulous! Now my bank doesn’t just come to me, it’s in my pocket whenever I need it. I personally prefer banking with an app on my mobile because I’ve got less chance of losing my internet connection, which can happen if my home wi-fi drops out while I’m using my laptop.

I pay any bills and my rent and transfer money with my mobile, all from the comfort of my living room. I have a linked account to try and save a little and can transfer money from one to the other in less than 20 seconds while standing at the checkout of a department store if need be. No fuss or holding up other customers. Quite the welcome evolution from that time waiting in a queue at the bank.

Even before I’d left my house recently, my rent was paid to my landlord and my phone bill done and dusted. My banking app will tell me exactly what I have left to spend, as well as show that my Age Pension has been paid into my account or that my son has gifted me a little spending money through his mobile banking service. Plus, it’s possible to create a PayID using a mobile banking app, so if someone does want to send me money, they could do it with just my mobile phone number – it’s easier to share than a BSB and account number – you get paid more quickly too.

If you have mobile banking, you can also set up a cardless withdrawal system in case you misplace your card or leave your card at home.

Plus, with mobile banking, I see the latest transactions on my phone within seconds when I use my card inside a store so there’s no worrying someone is using it without my knowing. And you can de-register your smartphone via the app too, so if you lose it or get a new one, you know the old one can’t be used to access your account. The banking app also lets you change your PIN anytime, which is useful if you’re worried that someone may have had access to it.

Since becoming a mobile banking customer, I have been on trips overseas and found it very easy and useful to manage my money outside Australia. And nobody has hacked it!

Often you only hear the negatives, but I think we are living in a lucky age, where most of us will never have to worry about our bank accounts too much. Digital banking, regardless of whether you do it on your computer or mobile, really is a bit of a modern-day miracle.

But if you haven’t given it a go, perhaps while we’re confined to our homes more but still need to pay bills and do the shopping, you might find it’s the perfect opportunity to give digital banking a try.

Sign up for Starts at 60’s next masterclass with ANZ!

Banking on the internet or through a mobile app – is it safe? Is your information secure? What happens if you make a mistake? Starts at 60 founder Rebecca Wilson will be asking all these questions in a free live event with some experts on digital banking and security from ANZ. Join us on 4 September 2020 at 1pm AEST!

What else did we do in the good ol’ days that, in retrospect, wasn’t that good?