Should you use bleach to clean your toilet? 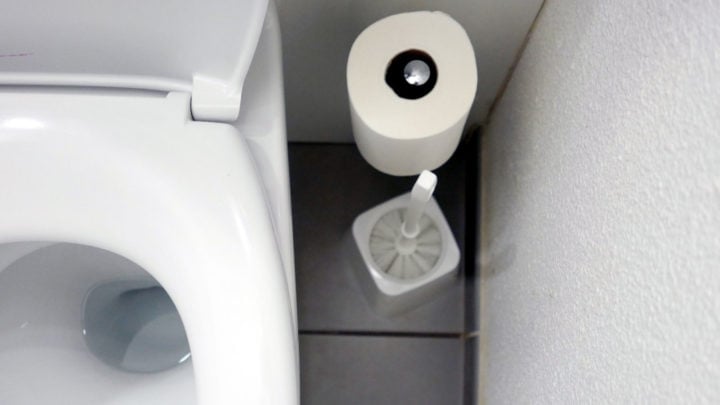 Ditch the harsh chemicals and turn to something a bit more natural when it comes to cleaning. Source: Getty.

When it comes to cleaning, some areas of the home just need some tender love and care while others need some more intensive attention to get rid of the grime and germs – and the toilet definitely falls under the latter.

When scrubbing the toilet, many people tend to get heavy-handed with the bleach to ensure they maintain a sparkling white bowl. But is bleach actually doing more harm than good when it comes to porcelain? One toilet salesperson thinks that this might just be the case.

A woman in the Facebook group Mums Who Clean posted her experience with a salesperson who warned her to never clean her toilet bowl with bleach as it can do irreversible damage.

“I’ve just bought a new toilet seat and I happened to mention that I clean my toilet with bleach,” the post read. “The lady told me I should never use bleach as it destroys the porcelain. She said eventually the toilet will not flush properly as the bend will be so scarred that it traps the paper.”

After asking the group for recommendations and assurance that this little known fact was actually true, the comment section quickly filled up with some people supporting the idea of ditching bleach, while others saw no issue with using the strong disinfectant.

One commenter thought the advice was far from the truth and debunked it with her own experience saying: “What a load of Twaddle. 20+ years of using bleach in/on and around the same toilet and it’s still flushing just fine – and the porcelain is still white.”

While another agreed that while the toilet bowl went unaffected, the seat was another story: “Don’t agree. Been putting bleach in toilet bowl for years and no trouble although did make plastic seats yellow and I replaced it after 15 years.”

This commenter wasn’t alone in struggling with the toilet seat however with another person complaining that it corroded the plastic which has now started peeling since they started using bleach to clean it.

But if you plan on ditching the chemicals, how else are you supposed to ensure your toilet stays as sparkling clean as the day you bought it? One commenter suggested the classic hack that’s not only cheap and easy to make but also infinitely better for the environment than other store-bought chemicals.

“I’m a bi-carb and vinegar girl for cleaning, I used it in my toilet for the first time the other day and it did a pretty impressive job, don’t think I’ll go back to other toilet cleaners now,” the commenter wrote. “Reading a lot of the comments, I think I have to agree that maybe they just don’t make things like they used to and harsh chemicals are just not that great with them, good luck!”

While bi-carb and vinegar is definitely one of the more popular natural cleaners, it’s not the only formula you can make from things readily available in your pantry.

For a clean-smelling, disinfected bathroom, try mixing 1/2 cup bi-carb soda, 1 cup distilled white vinegar and 1/2 teaspoon tea tree essential oil. Spray it on your toilet surfaces, let sit for a few minutes then wipe off with a cloth. Meanwhile you can also spray it in your bowl, let it sit for a few minutes, sprinkle some bi-carb into the bowl, scrub with a toilet brush and flush.

For something more heavy-duty, try 3/4 borax, 1 cup white vinegar, 10 drops lavender essential oil and 5 drops lemon essential oil. Flush the toilet to wet the sides of the bowl and pour the entire mixture in. Leave it to sit for several hours or overnight if you want and once your done simply scrub and flush to rinse.

Do you use bleach on your toilet? Have you ever had trouble with it?