Scone debate settled: Afternoon tea expert settles scone debate once and for all 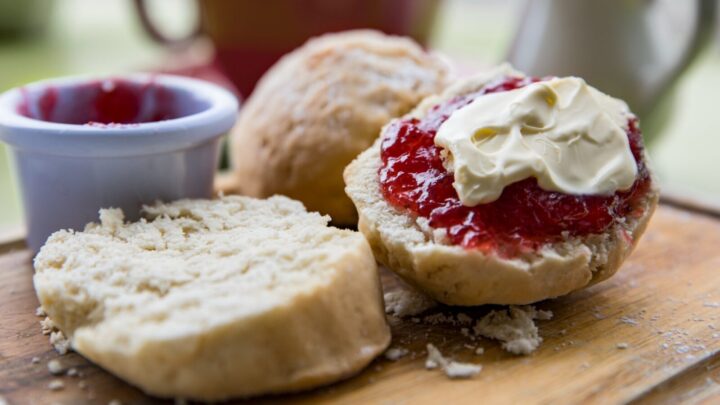 For as long as scones existed, there has been an ongoing debate over how to properly eat the delightful afternoon snack and how to actually pronounce its name.

Now, 65-year-old Jane Malyon, an afternoon tea expert, has come out to officially put the debate to rest.

Malyon, who runs the English Cream Tea Company, spends nearly every day eating and talking about the British baked good. She claims to have tasted hundreds of scone and tea varieties to present the perfect British afternoon tea.

According to her, while many people tend to put cream before their jam, she says it should be done the Cornish way with the jam going first before the cream.

Malyon says those from Cornwall see cream as the “crowning glory on top” of their scones.

“I do cream first,” she tells the Daily Record.

“But I’m fickle, I feel drawn to putting the dairy on first, but the fierce side comes out fighting for jam first. If you say cream first, they’re all over you like a rash.”

Malyon has also cleared up another afternoon tea discussion, whether the baked treat should be pronounced “sc-oh-n” or “sc-on”.

“I say it like it rhymes with ‘cone’ personally, but Her Majesty did always say ‘sc-on’,” she explains.

“I think more people say ‘sc-oh-n’ but the ones who say ‘sc-on’ swear they’re the only ones that say it right.

“Posh people definitely say ‘sc-on’ – but ultimately both are valid.”

The great scone conundrum has been an issue that has been debated by the likes of comedian Dawn French, who is a staunch advocate for “jam first” when it comes to serving scones, reigniting the debate when she claimed that she found it “offensive” to put cream before jam.

“What I would say is: butter is optional, but if you’re going to use butter, it goes first,” she explained.

“Then the jam, then the cream. That’s it. The big mistake is to think that cream is butter.

“Jam is for spreading, cream – and it’s got to be clotted cream – is the dollop. It’s the crown.

“If you do it the other way, I genuinely find it offensive! I just do. I’ve got into a bit of a Twitter war with certain people about it.”

Even our late Queen voiced her views on the scone debate, with Her Majesty reportedly preferring her scones with jam first then cream.

However, research done by Love Fresh Berries showed that age plays a key role in the scone philosophy, with the 18-24 age group opting to put cream before jam, whereas those aged 65 and over do it the opposite way.

Whatever the method, or however you choose to pronounce “scone”, if there’s one thing the world seems to agree with, is that jam and cream do be long on scones.

Which do you put on first? Jam or cream?