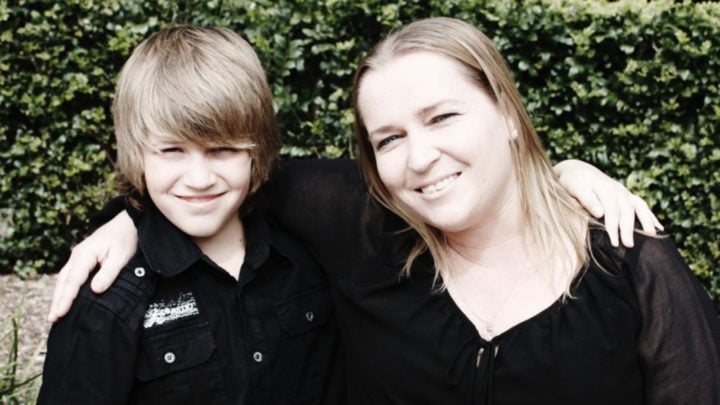 An Aussie funeral director has issued a heartfelt plea for people to speak openly to their loved ones about their wishes for when they pass away, after she tragically had to plan funerals for two of her own children.

Andrea Bowkett lost her daughter 18 years ago as a baby, before her 15 -year-old son Scott died almost six years ago at the age of 15 after battling bone cancer. While she had to plan her daughter’s funeral with almost no notice, her son took matters into his own hands and let her know exactly what he wanted for his own quirky send-off – and it inspired her to start working in the industry herself.

From banning the colour black and instead having guests dress up in fancy dress, to ensuring his coffin came complete with a Stormtrooper to honour his love of Star Wars, Scott planned an incredible send-off for himself. And looking back now, Andrea says his brave decision took away a huge amount of stress for her in the days that followed his death.

“In the couple of weeks after we found out he was terminal, we talked about it a lot,” she told Starts at 60. “It was very difficult for other people to understand that conversation because it’s something that’s so taboo, but for us it was really important to make sure that things were done the way that he wanted.”

In the months after Scott’s death, Andrea began by working as a telephone consultant for the celebrant who organised his funeral, before going on to work for a friend doing mortuary transfers. When her friend then bought a small funeral home in their hometown of Ipswich in Queensland, L.R. Thomas Funeral Director, she began working part-time as a funeral director and in-house celebrant.

Now she has sent a moving message to other families on the importance of being open with your loved ones about exactly want you want. While she said many people like to keep their send-off traditional, others may wish for something different – and letting family know your wishes can help ease their stress at an already extremely difficult time.

“A lot of people will come in and have no idea what they want,” she said. “So it’s a really important conversation to have before you get to the point when you can’t have that conversation, to let people know what you want.”

Andrea added: “A lot of people do tend to go traditional, but when we meet with a family we ask them what that person was like, what their passions were, what is it that you loved about them the most… What are you going to miss the most. We try to add little pieces into the conversation to find ways to incorporate that into the service, so for a grandma who liked making quilts, rather than an expensive bunch of flowers, we’ll lay one of her quilts over and knitting needles on top.”

Having worked for three years now in the industry, Andrea has continued her son’s amazing legacy and planned some funerals with a unique twist. One that has stuck in her mind is that of Brisbane music icon Brentyn ‘Rollo’ Rollason, who died earlier this year.

“He was well known in the punk industry and had been helping underground bands for 30 years to get out there,” she recalled. “He actually passed away from a heart attack just before he was to go on stage in the Valley.

“One of his bandmates had come to our funeral home 15 years ago when his father had died and he remembered the hearse we had. We have a classic HT Holden hearse. He rung us up to see if we still had it and through that we got the job of looking after Rollo. I love punk music so my first thought was, ‘This guy needs to have his funeral at the Tivoli theatre’.

“So we had 1,500 people packed into that theatre. We had one of his close friends who hand-painted his coffin. It was just incredible, one of the most amazing funerals that you could ever imagine. It was full of laughter and great. I get goosebumps talking about it.”

Meanwhile, well aware of how expensive funerals can be following her own heartbreaking experience, Andrea said she tries to accommodate every family by adding personal, less expensive touches where she can – something that can be much easier to do when families have their own ideas of what would honour their loved one. For example, while the funeral home she works at offers cheaper MDF coffins, she makes coffin covers out of crushed velvet to cover them – immediately saving hundreds.

“We don’t do what we do to make money, we do it to give people the best experience at the worst possible time,” she insisted. “If we can help a family through financially and emotionally, then we’ll find a way to do it. I’ve been there, I’ve had to have two funerals for my children that I wasn’t expecting to have to pay for. I completely understand that when you’re slapped with a $12,000 bill for a funeral and you don’t have the money, it’s terrifying.

“You feel so vulnerable, you want to give your loved one the best possible service you can, you want them to have the best of everything because you love them so much they deserve that. A lot of people feel pressured at that time to sign up to something they just can’t afford. We do go out of our way to try and help our families cut costs where they can be cut.”

Andrea said she – like some other funeral homes in Australia – also offers free services for babies and children, adding: “We go out of our way for people who’ve lost children because we’ve been there.”

Have you had to plan a funeral for a relative? Did they have chance to tell you their wishes? Have you spoken to loved ones about your own wishes?