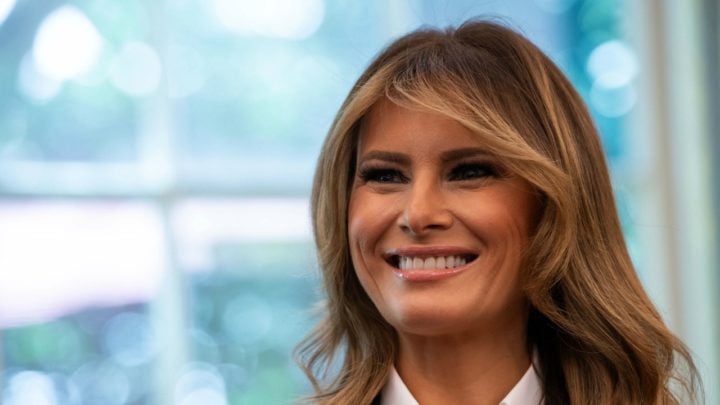 Melania Trump looked gorgeous in a bold power suit for a meeting with the prime minister of Netherlands. Source: Getty

There is no denying Melania Trump has an impressive wardrobe collection, always stepping out in a stylish ensemble of some sort and her latest outfit was no different as she perfected the business look in a classy suit.

The First Lady was full of confidence in a pair of tailored black pants, a matching jacket and a simple, yet smart white buttoned shirt for an important event alongside her husband US President Donald Trump this week.

Standing tall in black heels the mother-of-one walked with pride through the White House with her hair brunette locks styled in soft waves over her shoulders.

Melania opted for simple makeup for the meeting with Prime Minister of the Netherlands Mark Rutte, with a soft pink lip and a swipe of blush to her cheeks.

The 49-year-old and her husband met with Rutte late in the week to celebrate America with the handing over of a historic item that is set for display at a US museum.

Taking to Twitter to update fans on the occasion the First Lady wrote: “A beautiful piece of history returned home today. Thank you PM Rutte for presenting an American flag that flew aboard a US Navy Ship on D-Day.

“The historic flag will be on display at the @smithsonian. A reminder of the service and sacrifice of so many Americans.”

A beautiful piece of history returned home today. Thank you PM Rutte for presenting an American flag that flew aboard a US Navy Ship on D-Day. The historic flag will be on display at the @smithsonian. A reminder of the service & sacrifice of so many Americans. @amhistorymuseum pic.twitter.com/uzwrU20Okj

It has been a busy time for the mother who was spotted earlier this month in a stylish denim dress as she attended an official engagement in West Virginia.

The First Lady looked stunning in the midi-length denim dress, which she paired with a trendy brown belt and matching suede stilettos for the outing.

Keeping with a natural look, Melania chose to go without jewellery, while using dark mascara to highlight her eyes and a hint of blush on her cheeks. As for her hair, the mother-of-one stuck with her usual down wavy style.

Melania was in West Virginia to meet with state and local leaders about the ongoing opioid crisis. She was pictured meeting with officials as she heard how the area’s police, schools and health care centres are trying to fight the crisis.

There is great work being done in Huntington, WV. Thank you to all who attended & shared the incredible strides this community has made in combatting the opioid epidemic.@DHSMcAleenan, @sen_joemanchin, @WVGovernor, @senCapito, @repcarolmiller, @Huntingtonmayor #BeBest pic.twitter.com/nB0S1SBc7A

The first lady has made the ongoing opioid crisis one of the key pillars of her Be Best initiative, the other two include well-being and positivity.

“I am here to give you my support,” she said in the meeting, according to Yahoo News.

Read more: Melania Trump is radiant in white as she shares rare loving display with Donald

The mother-of-one later flashed a thumbs up to photographers before boarding a plane back to Washington.

Are you a fan of Melania Trump? What do you think of her outfit choices?