Daily Joke: Why did the chicken cross the road? 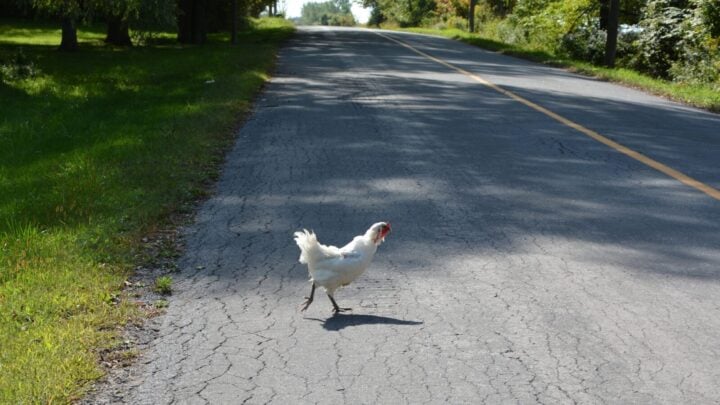 It's impossible to know for sure... Source: Getty Images

Will we ever get a straight answer to one of the simplest questions of all time?

This is a bit more philosophical, and the political references are a bit dated now, but some of you might be into that kind of thing.

WHY DID THE CHICKEN CROSS THE ROAD?

Plato: For the greater good.

Karl Marx: It was a historical inevitability.

Machiavelli: So that its subjects will view it with admiration, as a chicken which has the daring and courage to boldly cross the road, but also with fear, for whom among them has the strength to contend with such a paragon of avian virtue? In such a manner is the princely chicken’s dominion maintained.

Hippocrates: Because of an excess of light pink gooey stuff in its pancreas.

Thomas de Torquemada: Give me 10 minutes with the chicken and I’ll find out.

Timothy Leary: Because that’s the only kind of trip the Establishment would let it take.

Nietzsche: Because if you gaze too long across the road, the road gazes across you.

B.F. Skinner: Because the external influences which had pervaded its sensorium from birth had caused it to develop in such a fashion that it would tend to cross roads, even while believing these actions to be of its own free will.

Carl Jung: The confluence of events in the cultural gestalt necessitated that individual chickens cross roads at this historical juncture, and therefore synchronicitously brought such occurrences into being.

Jean-Paul Sartre: In order to act in good faith and be true to itself, the chicken found it necessary to cross the road.

Ludwig Wittgenstein: The possibility of “crossing” was encoded into the objects “chicken” and “road”, and circumstances came into being which caused the actualisation of this potential occurrence.

Aristotle: To actualise its potential.

Buddha: If you ask this question, you deny your own chicken nature.

Howard Cosell: It may very well have been one of the most astonishing events to grace the annals of history. A historic, unprecedented avian biped with the temerity to attempt such an herculean achievement formerly relegated to homosapien pedestrians is truly a remarkable occurrence.

Darwin: It was the logical next step after coming down from the trees.

Emily Dickinson: Because it could not stop for death.

Ralph Waldo Emerson: It didn’t cross the road; it transcended it.

Johann Friedrich von Goethe: The eternal hen principle made it do it.

Ernest Hemingway: To die. In the rain.

Werner Heisenberg: We are not sure which side of the road the chicken was on, but it was moving very fast.

David Hume: Out of custom and habit.

Jack Nicholson: ‘Cause it (censored) wanted to. That’s the (censored) reason.

Pyrrho the Sceptic: What road?

The Sphinx: You tell me.

Henry David Thoreau: To live deliberately … and suck all the marrow out of life.

Mark Twain: The news of its crossing has been greatly exaggerated.