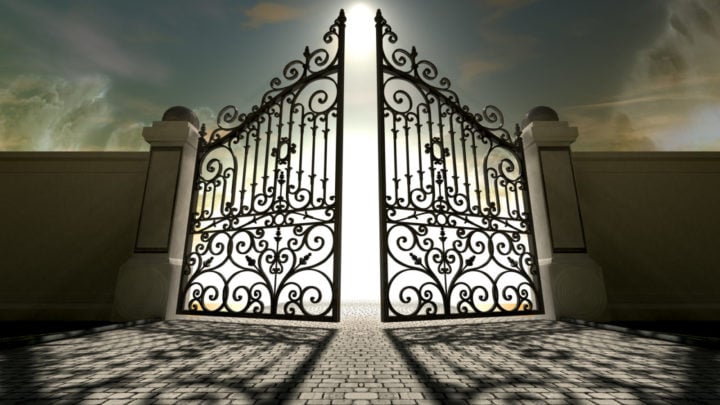 Three Italian nuns arrive at the pearly gates and are told that, because they have devoted their lives to the world, they can return to earth for three months, taking on the identity of any person they choose.

The first nun said she wanted to return as Helen of Troy.

“Because she was so beautiful, and remembered for it, while we have had to cover ourselves all our lives,” she said and her wish was granted.

The second nun was given her chance and decided to return as Florence Nightingale, so that the good work she had done might be recognised by all the world. This, too, was readily granted.

The third nun said she wanted to return as Sarah Pippilini.

“Who in the name of all that’s wonderful is Sarah Pippilini?!” asked a curious St Peter.

“Well, I’m not sure either,” said the nun. “But look at this newspaper.” She rolled out showing a photo of several oil workers and the proud headline: “Sahara pipeline, laid by 300 men in 30 days”.

Fred was worried about his wife’s hearing

Fred feared his wife Rhonda might not be hearing as well as she used to and he thought she might need a hearing aid. Unsure how to approach her, he called the family doctor to discuss the problem.

The doctor told him there is a simple informal test the husband could perform to give him a better idea about her hearing loss.

“Heres what you do,” said the doctor, “stand about 40 metres away from her and in a normal conversational speaking tone see if she hears you. If not, go to 30 metres, then 20 metres and so on until you get a response.”

That evening, the wife is in the kitchen cooking dinner, and he was in the den. He says to himself: “I’m about 40 metres away. Let’s see what happens”. Then in a normal tone, he asks her: “Honey, what’s for dinner?”

So the husband moves closer to the kitchen, about 30 metres from his wife and repeats: “Rhonda what’s for dinner?”

Next he moves to the dining room where he is about 20 metres from his wife and asks: “Honey, what’s for dinner?”

Again, no response. So he walks up to the kitchen door, about 10 metres away. “Honey, what’s for dinner?”

Once again, no response. So he walks up right behind her and with a sigh he asks: “Rhonda, what’s for dinner?”

“Damn it, Fred, for the fifth bloody time, it’s chicken!”

A man walks into a pub

A man walks into a pub and sees Vincent Van Gogh sitting in the corner.

“Fancy a pint Vincent?” he asks.