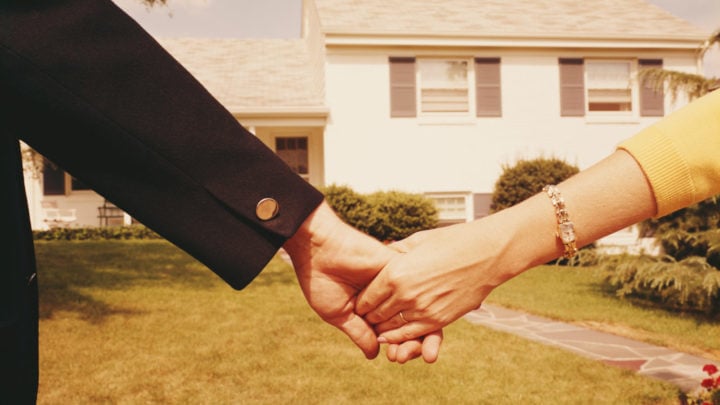 They moved back to their old neighbourhood together. Source: Getty.

An elderly couple were celebrating their 60th anniversary. They had married as childhood sweethearts and moved back to their old neighbourhood after they retired.

Holding hands, they walked back to their old school. It was not locked, so they entered and found the old desk they’d shared, where Jerry had carved the words ‘I love you, Sally’.

On their way back home, a bag of money fell out of an armoured car, practically landing at their feet. Sally quickly picked it up and, not sure what to do with it, they took it home. There, she counted the money and found that it was $50,000!

Jerry said: “We’ve got to give it back.” But Sally put the money back in the bag, hid it in their attic and said: “Finders keepers.”

The next day, two police officers were canvassing the neighbourhood looking for the money and knocked on their door. The officer said: “Pardon me, did either of you find a bag that fell out of an armoured car yesterday?”

Sally shook her head. Jerry said: “She’s lying. She hid it up in the attic.”

The agents turned to Jerry and began to question him. One said: “Tell us the story from the beginning.”

Jerry said: “Well, when Sally and I were walking home from school yesterday.”

The first police officer turned to his partner and said: “We’re outta here!”

Six retired Irishmen were playing poker in O’Leary’s apartment when Paddy Murphy lost $500 on a single hand, clutched his chest, and dropped dead at the table. Showing respect for their fallen brother, the other five played on standing up.

Michael O’Connor looked around and asked: “Oh, me boys, someone got’s to tell Paddy’s wife. Who will it be?”

They drew straws and Paul Gallagher picked the short one. They told him to be discreet, be gentle and try not to make the bad situation any worse.

“Discreet? I’m the most discreet Irishmen you’ll ever meet. Discretion is me middle name. Leave it to me.”

Gallagher headed over to Murphy’s house and knocked on the door. Mrs Murphy answered, and asked what he wants.

Gallagher declared: “Your husband just lost $500 in a poker game, and is afraid to come home.”

Daily Joke: A police chief was receiving an award.

A police chief was receiving an award.

“Next,” the conference emcee announced. “We have the chief of the State Police, Roger Smith, who is here with his lovely wife, Beverly.”

The chief took his place at the lectern. “I’m a little nervous,” he began. “Getting up before this distinguished audience and speaking today. But not nearly as nervous as I will be tonight when I must go home with my wife, Audrey, and explain Beverly to her!”