Daily Joke: A woman met a cowboy who was wearing big boots 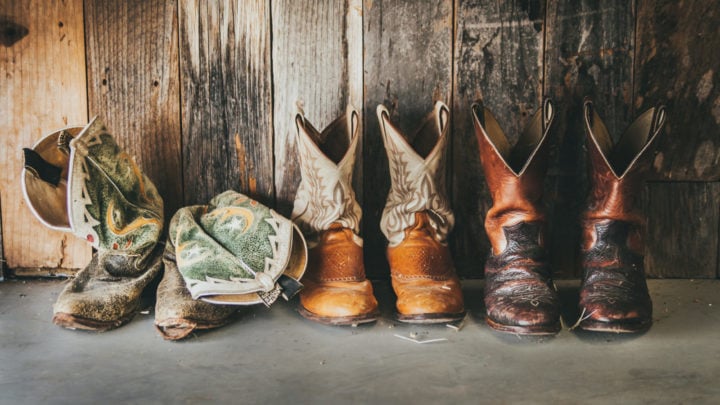 The woman asked the cowboy if it's true what they say about men with big feet are well endowed. Source: Getty.

A lady entered a bar and saw a cowboy with his feet propped up on a table. He had the biggest boots she’d ever seen.

The woman asked the cowboy if it’s true what they say about men with big feet. The cowboy grinned and said: “Sure is, little lady. Why don’t you come on out to the bunkhouse and let me prove it to you?”

The woman wanted to find out for herself, so she spent the night with him. The next morning she handed him a $100 note.

Blushing, he said: “Well, thank ya, ma’am. Ah’m real flattered. Ain’t nobody ever paid me for my services before”.

“Don’t be flattered. Take the money and buy yourself some boots that fit.”

A man who had spent his whole life in the desert visited a friend. He’d never seen a train or the tracks they run on.

While standing in the middle of the railroad tracks, he heard a whistle, but didn’t know what it was. Predictably, he was hit and thrown to the side of the tracks, with some minor internal injuries, a few broken bones, and some bruises.

After weeks in the hospital recovering, he attended a party at his friend’s house. While in the kitchen, he suddenly heard the teakettle whistling.

He grabbed a bat from the nearby closet and proceeded to batter and bash the teakettle into an unrecognisable lump of metal. His friend, hearing the ruckus, rushed into the kitchen, saw what’s happened and asked the desert man: “Why’d you ruin my good tea kettle?”

The desert man replied: “Man, you gotta kill these things when they’re small.”

A young man is asked to work a machine

A young executive is working late one evening. As he comes out of his office he sees the big boss standing by the shredder in the hallway with a piece of paper in his hand.

“Do you know how to work this thing?” the older man asks. “My secretary’s gone home and I don’t know how to run it.”

“Yes, sir,” says the young executive, who turns on the machine, takes the paper from the other man, and feeds it in.