How clean is your bed? Study reveals one in three wash sheets just once a year 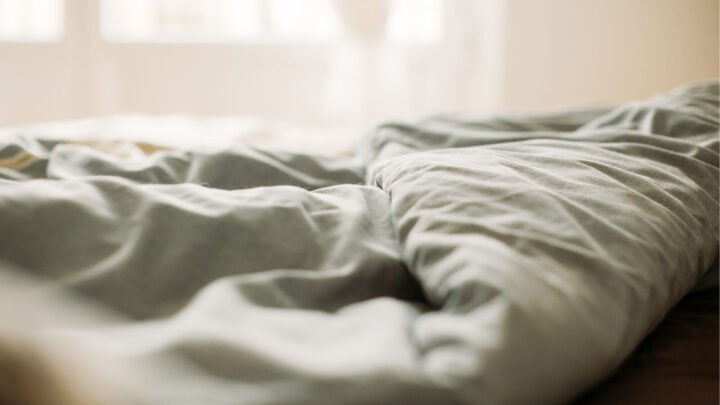 According to a recent study, some people only wash their bed sheets once per year. Source: Getty

There’s nothing quite like getting into a bed fitted with freshly washed sheets, it smells nice and it just feels a lot comfier than usual.

But, a new study has revealed how little some people actually wash their bedding – and it may shock you. According to research carried out by Hammonds Furniture, one in three people wash their sheets just once a year, the Daily Mail reports.

The survey of 2,000 people also found that a further 38 per cent of respondents only gave their coats a clean once per year as well. And over a quarter of survey participants washed their cushions and blankets just one time a year too.

However, when it came to underwear that was more frequent for women, with the majority claiming they washed them after every wear. This was compared to some men, with a quarter of male respondents admitting to washing their underwear after wearing them five times.

The results have sparked a wider conversation around the world, with people discussing their washing habits online.

“Bedding once a week, towel every time after it has been used and underwear changed twice a day, clean pyjamas every night,” one person wrote on Facebook.

“As and when they need it. Ideally once a week – there’s nothing that can compare to getting into bed with lovely fresh sheets,” another commented. While a third said: “Underwear obviously every day. Bedding at least once a week and clean towels every other day (except for the hand towel in the bathroom – that’s changed daily). Gloves and scarves once a month and winter coat the same.”

Meanwhile, doctor Aragona Giuseppe told publication Hull Live you should definitely be washing your bed sheets regularly, for many reasons.

“Bed sheets and pillow cases should be washed as if they are dirty this could promote acne, spots and other skin issues due to the dirty bacteria on the sheets transferring to your skin,” she said.

Kirsty Oakes, head of product and marketing at Hammonds Furniture agreed and said while it’s tempting to put off the task of washing, keeping clean is now more important than ever.

“If you’ve found yourself washing things less often than is recommended then set aside time each week to do your washing and try to always stick to it,” she said according to Hull Live. “Make the effort to wear clean, fresh clothes each day (even if you’re working from home) and just remember how amazing fresh sheets feel when you climb into bed!”

How often do you wash your bedding? Is once a year too little?