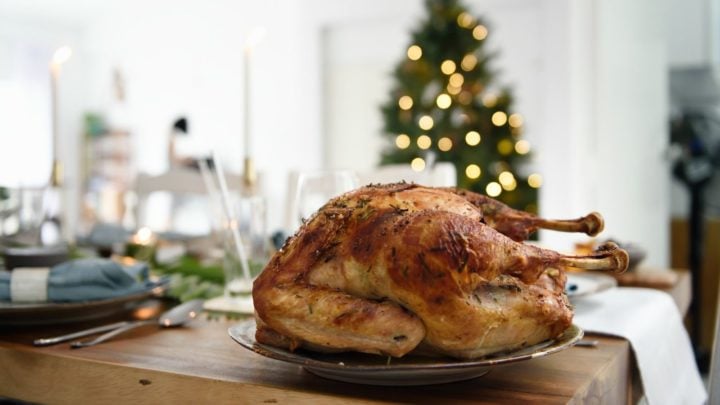 How to avoid food poisoning this Christmas. Source: Getty

Christmas has arrived and the table is set – there’s fresh seafood, sliced turkey and a honey-glazed ham. Nothing signifies the festive season quite like a big feast for the whole family, but the last thing you want on Christmas Day is to give your guests food poisoning.

Sadly, delicious feasts on hot summer days are the perfect breeding ground for harmful bacteria such as salmonella and listeria, so it’s important to take food safety and food poisoning seriously.

With the help of Lydia Buchtmann from the Food Safety Information Council (FSIC), we’ve rounded up some handy tips to help you avoid getting sick this silly season.

If you’re hosting Christmas lunch, talk to friends and family to work out who brings what. Arrange to prepare and cook riskier foods like meat, seafood, or dairy products at home. Those travelling for more than an hour could bring less risky foods that don’t need refrigeration or keeping hot, such as cakes, biscuits and Christmas puddings.

In order to prevent food poisoning in hot food, food should be kept at 60ºC or above until served. Alternatively, cold foods need to be stored at 5ºC or cooler, so it’s important to get these foods in the fridge as soon as possible, especially in the warm weather.

You might think it’s a smart idea to start stocking up your fridge and freezer early, but an overfull fridge isn’t going to work as efficiently. According to Buchtmann, an overcrowded fridge doesn’t allow the cold air to circulate freely around the food to keep it adequately frozen or chilled.

To free up some space, non-perishable items like drinks that don’t easily spoil can be removed. Buchtmann recommends filling the laundry sink or a leak-proof container with ice to keep water, beer and soft drinks chilled. You’d rather serve your guests lukewarm water and soft drink than increase the risk of food poisoning.

“This also stops guests opening the fridge and helps maintain the temperature at 5°C or below,” Buchtmann adds.

Instead of cooking up a whole bird, why not opt for a turkey breast or turkey roll instead? Whole turkeys take several days to defrost in the fridge, not to mention hours to cook properly, and also increase the risk of potentially contaminating ready-to-eat foods stored in the fridge. However, if you’re still keen on cooking a whole turkey, Buchtmann recommends asking your butcher or supplier to defrost the turkey in their cool room for you.

And you should never wash your turkey before cooking it, as this can spread bacteria onto hands, work surfaces, clothing and cooking equipment.

Eating raw and undercooked egg dishes can cause serious food poisoning, as some eggs may contain salmonella.

“Try to avoid raw or minimally cooked egg dishes, such as raw egg mayonnaise or aioli, egg nog or fancy desserts, which can be a particular risk for food poisoning,” Buchtmann advises.

Don’t leave the starters out all day

Dips and other ready-to-eat foods like cold meats and soft cheeses should be put in the fridge once everyone moves onto the mains. Buchtmann says starters shouldn’t be left out for more than two hours, adding: “Put out small amounts and replace from the fridge – don’t just top them up.”

Refrigerate leftovers as soon as possible

“If leftovers have been left out of the fridge for less than two hours they should be okay to refrigerate or freeze to eat later, so long as it hasn’t been sitting in the sun,” Buchtmann explains.

“Don’t forget to wash your hands in warm soapy water before preparing and cooking food, and after handling eggs, raw meat,” Buchtmann adds.

Have you ever had food poisoning? Are you careful with the foods you eat and how you store them?