The perfect winter treat! Mouthwatering bread and butter pudding with a twist 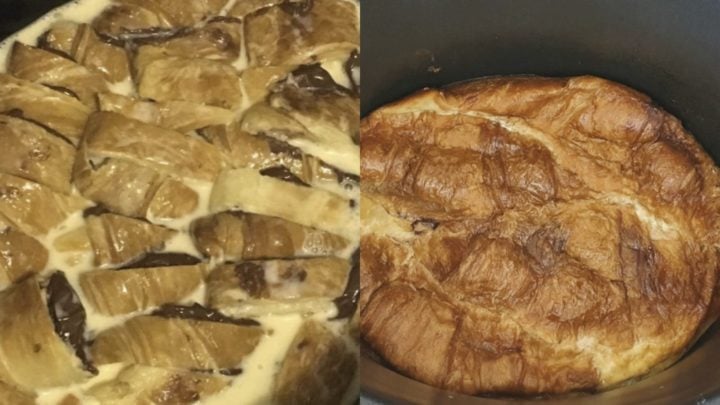 This bread and butter pudding is a little different - it's made with croissants and Nutella! Source: Facebook/ Slow Cooker Recipe and Tips

Winter has well and truly arrived, with temperatures quickly dipping into the single digits. If you’ve been eager to indulge in an after-dinner treat to warm your belly, you’re certainly not alone. While you could stick with the original winter desserts such as sticky date pudding or a warm chocolate cake, there’s another recipe which has grabbed the attention of home cooks around the country, and it looks mouthwatering. Think bread and butter pudding, but with a twist.

Instead of using the traditional ingredients of bread and butter, one home cook has changed things up, instead using croissants and Nutella. The recipe was shared to Facebook group Slow Cooker Recipe and Tips this week and you’ll be pleased to know it seems fairly easy to make — especially considering it’s made in a slow cooker.

“Desserts in,” the post read. “Bread and butter pudding with Nutella and croissants. Six mini croissants sliced, Nutella ‘buttered’ on the cut sides, two cups of milk, four eggs, two tablespoons of sugar, a dash of vanilla extract. I’m cooking on low for two hours as my slow cooker runs hot, with a tea towel under the lid.”

The post received a lot of attention from fellow cooks who were all eager to give the recipe a go. Some even suggested alternatives to croissants for a bit of a different flavour.

“Looks so nice,” Richard Hall commented on the post. “If hot cross buns are still on sale they make a great alternative, or try using raisin bread. Delicious.” While Helen Jennings commented: “Do you deliver? Holy moley that looks awesome!” Another member of the group added: “My cheat day?”

However, if you’re looking for a warm dinner option instead, perhaps slow cooker beef and vegemite pies will take your fancy. Over the weekend, another home cook took to social media to share the recipe with fellow Aussies, and while it may sound a little strange to begin with, it looks delicious. The recipe contains many kitchen staples, so you might not even have to head to the shops before trying them out.

The home cook used ingredients such as dried herbs, tomato sauce, olive oil, stock cubes, flour and vegemite to make a rich filling for the meat pies which she then cooked in a slow cooker. The mixture was marinated for around four hours and then piled into puff pastry sheets, topped with more pastry and baked quickly in the oven until golden brown.

“My chunky beef pies. I am super happy with how they turned out. Hubby ate two pies,” the post shared on Facebook group Slow Cooker Recipes Australia read. “I did the meat mixture in the slow-cooker.”

Have you ever tried making bread and butter pudding with croissants? What's you favourite thing to cook in the slow cooker?