How walking speed could be linked to dementia 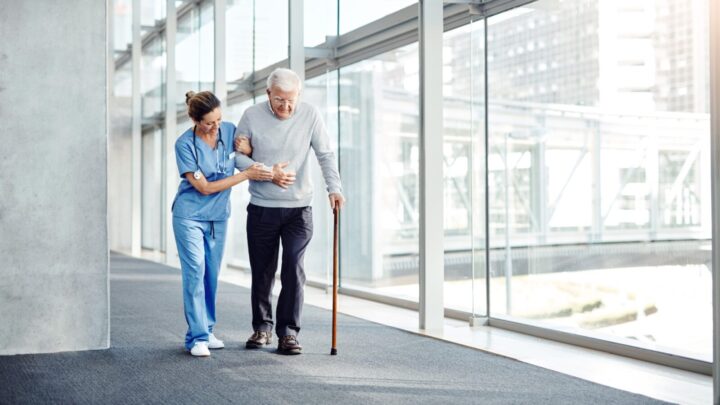 Globally, 50 million people live with dementia, a number that is predicted to triple in the next 30 years. Source: Getty

Wasn’t it Simon and Garfunkel who told us to “Slow down, you move too fast. You’ve got to make the morning last”? Now, a new study has suggested that walking slower as you get older may be a sign of impending dementia.

An Australian and US-based research of 17,000 people, aged 65 or older, found walking slowly can be an early sign of cognitive decline.

“These findings underscore the importance of the method in assessing dementia risk,” says Daya Collier, a research fellow at Monash University School of Peninsular Medicine in Victoria, Australia.

Their research suggests that GPs and clinicians implement a simple memory and walking-speed test in their practice to help identify if an elderly person is at risk of dementia, allowing them to introduce preventative measures early on.

Though previous studies have looked into the links between a person’s cognitive decline and dementia, this is the first research that has used walking and memory tests to determine a person’s risk of dementia.

Did you know that #Dementia represents second leading cause of death of Australians?!@DementiaAus posted some very interesting key facts and #statistics about dementia in #Australia and #worldwide. Click here to see the whole article on their website https://t.co/YqluxWUCfE pic.twitter.com/jy1Neo0rzF

“They would be the ones to try to make sure that their blood pressure is well controlled, that they are physically active, that they have a good diet, that they connect socially … all the good things that hold off the risk of dementia,” Srikanth said.

“We don’t have many successful treatments at the moment, but if they do come up in the future, then we’ll know who to target those treatments too.”

And while the six-year-old study paves the way for better treatment for those with dementia, this disease still places a huge strain on both patients and their families.

Another recent study from Johns Hopkins University in Maryland shed more light on dementia and discovered that those with a genetic risk of dementia can reduce their chance of developing the condition with seven simple lifestyle changes.

As part of the Genetic Risk, Midlife Life’s Simple 7, and Incident Dementia in the Atherosclerosis Risk in Communities Study, researchers developed a scoring system for each participant based on seven health factors outlined by the American Heart Association. These factors were: stop smoking, eat a healthy diet, maintain a healthy weight, remain physically active, control blood sugar levels, cholesterol levels and blood pressure. Participants reported their levels in all seven health factors.

“The good news is that even for people who are at the highest genetic risk, living by this same healthier lifestyle are likely to have a lower risk of dementia,” Tin said.

“These healthy habits in the Life’s Simple 7 have been linked to a lower risk of dementia overall, but it is uncertain whether the same applies to people with a high genetic risk.

“Larger sample sizes from diverse populations are needed to get more reliable estimates of the effects of these modifiable health factors on dementia risk within different genetic risk groups and ancestral backgrounds.”