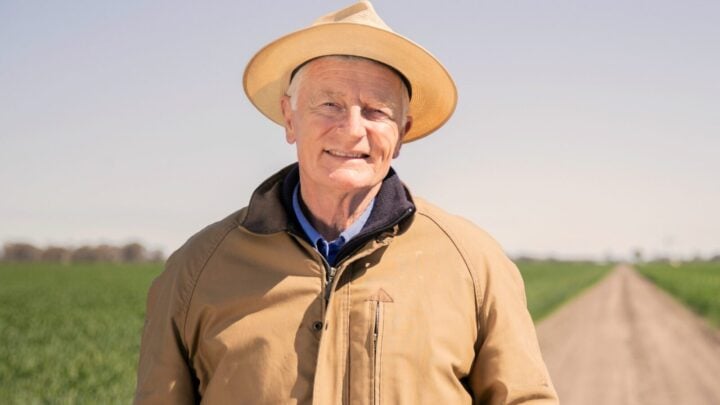 The former cricketer turned farmer played for Australia in the late 1980s to the early 90s. Source: Supplied.

Cricket great Peter Taylor has spent his fair share of time in the sun — from his childhood to his successful cricketing stint and his farming career later in life — for these reasons, the 64-year-old has always taken sun safety seriously.

“Being fair-skinned and my mum, who was English, was pretty big [on] keeping out of the sun,” he tells Starts at 60, adding he always opted for long sleeves while on the cricket field. The former cricketer-turned-farmer played for Australia in the late 1980s to the early 90s.

“I was never one of those guys that liked to go to the beach and lie on the [sand] with my shirt off.”

Despite his best efforts though, Peter has had a number of non-melanoma skin cancers either cut out or burnt off over the past decade.

“I started to see these little scaly things coming up on my skin… in my early to mid-50s,” he says. “I’ve had lots of basal cells burnt off and a few of them I’ve had cut out.”

Basal cell carcinoma (BCC) is the most common but least dangerous type of skin cancer. Symptoms of BCC can include a pearly lump or a scaly, dry area that is shiny and pale or bright pink in colour. According to the Cancer Council Australia, BCC accounts for about 70 per cent of non-melanoma skin cancers. But Peter says you can’t take them for granted, adding: “If you leave them long enough they will cause real problems.”

On the other hand, squamous cell carcinoma (SCC), while it only accounts for about 30 per cent of non-melanoma skin cancers, generally grows quickly over weeks or months and can be life-threatening. Symptoms of SCC may include a thickened red, scaly spot or a rapidly growing lump that looks like a sore, has not healed and may be tender to touch.

The former cricketer is now on a mission to raise much-needed awareness about non-melanoma skin cancers.

“It’s a message that’s got to get out there,” he says. “Especially for my generation and people in regional [Australia] who live an outdoor life. You just [got to] be conscious of it.

“Get checked by an expert and do it regularly. Obviously [keep up with] good skincare, cover-up, don’t think because you’ve got olive skin you can go out in the sun and it’s not going to matter if you get sunburnt.”

“The stark reality is the mortality rate for non-melanoma skin cancer is significant and by some estimates could be responsible for more deaths in Australia than melanoma in the coming years,” Associate Professor Alex Guminski said in a statement.

“In contrast, the mortality rate for melanoma appears to have declined over the last few years, possibly due to greater awareness among the general population and the availability of newer treatments for advanced melanoma.”

So what causes it?

According to the Cancer Council Australia, between 95 and 99 per cent of skin cancers in Australia are caused by exposure to the sun. Other skin cancer risks include those who have an increased number of unusual moles, fair skin, a tendency to burn rather than tan, freckles, light eye colour, light or red hair colour and had a previous skin cancer spot.

Have you had a non-melanoma skin cancer cut out or burnt off before?